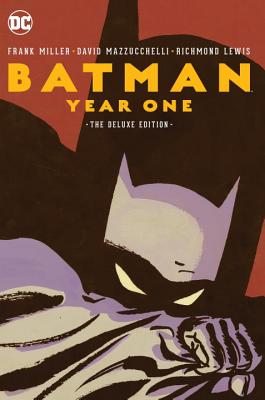 In 1986, writer Frank Miller joined with artist David Mazzucchelli and colorist Richmond Lewis to create one of the most groundbreaking superhero tales ever to see print—BATMAN: YEAR ONE, now available in a deluxe edition!

Originally published over four issues in the monthly BATMAN series, this mesmerizing story followed the unprecedented success of Miller’s apocalyptic saga BATMAN: THE DARK KNIGHT RETURNS to become one of the most popular and influential graphic novels in the history of American comics. By turns brutal, tender, grim and hopeful, Miller and Mazzucchelli’s masterful reimagination of Bruce Wayne’s first year as Gotham City’s champion has electrified generations of readers with its unprecedented fusion of gritty realism and elegance of form.

Now, DC Comics is proud to present a special new hardcover collection of this modern comics classic. Featuring digitally remastered art, introductions by Miller and series editor Dennis O’Neil and an illustrated afterword by Mazzucchelli, BATMAN: YEAR ONE THE DELUXE EDITION also contains more than 40 pages of behind-the-scenes material, including the complete script and pencil breakdowns for BATMAN #407.

"You know that saying, 'If you read just one book, this is the one to read?' Well, that applies to BATMAN: YEAR ONE. It's not only one of the most important comics ever written, it's also among the best."--IGN

"There's never been storytelling quite like this. It took someone who views comics as an art to create it."--WASHINGTON POST

"The best thing that Miller has ever written about Batman is the BATMAN: YEAR ONE story."--WIRED

"The artwork by Mazzucchelli--from the Milton Caniff school by way of Alex Toth ("Zorro") and Doug Wildey ("Jonny Quest")--may be the best BATMAN has ever had. As for Miller, his characterization of Batman-Bruce Wayne is intelligent and convincing, and his ability to mount an action scene is second to none...an interesting, entertaining update."--LA TIMES BOOK REVIEW

Frank Miller began his career in comics in the late 1970s and rose to fame while first drawing, and then writing, DAREDEVIL for Marvel Comics. He was also the creative force behind BATMAN: THE DARK KNIGHT RETURNS, BATMAN: YEAR ONE and BATMAN: THE DARK KNIGHT STRIKES AGAIN. His many works have not only redefined classic characters, but also, on a few occasions, revitalized the comics industry. His multi-award-winning graphic novel 300 was brought to full-blooded life in the 2007 motion picture of the same name, and in 2008 he directed the feature film Will Eisner's THE SPIRIT. His creator-owned crime saga SIN CITY first hit the page in 1991, and then the silver screen in 2005, with Miller on board as co-director with Robert Rodriguez. The two returned to direct the sequel SIN CITY: A DAME TO KILL FOR, released in 2014 and featuring two new stories by Miller. In 2015, Miller returned to his best-selling series with the highly anticipated DARK KNIGHT III: MASTER RACE.
Loading...
or support indie stores by buying on
(This book is on backorder)