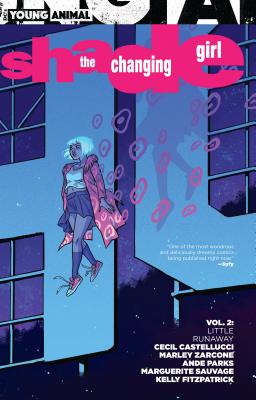 Loma needed a change from Meta, a boring and passionless planet--at least for a frustrated teenager.

In a leap of madness, Loma broke through galaxies to take up residence in the body of a human girl on Earth. Only now that she's here, Loma discovers being a teenage Earth girl comes with its own challenges, and Earth may not be everything she thought it'd be.

She's been here for some time now, and she's ready for her next move: but what will it be? When it comes to Loma of Meta, there's no telling which direction she'll move.

Written by Cecil Castellucci (THE PLAIN JANES), drawn by Marley Zarcone (EFFIGY) and overseen by Gerard Way, SHADE, THE CHANGING GIRL continues the story of one of comics' most unique series. SHADE, THE CHANGING GIRL is a part of DC's Young Animal--a four-book grassroots mature-reader imprint, creatively spearheaded by Gerard Way, bridging the gap between the DC Universe and Vertigo and focusing on the juxtaposition between visual and thematic storytelling.

Cecil Castellucci is the author of books and graphic novels for young adults, includingBOY PROOF, THE PLAIN JANES, FIRST DAY ON EARTH and the Eisner-nominated ODD DUCK. She is currently writing SHADE, THE CHANGING GIRL, an ongoing comic on Gerard Way's DC's Young Animal imprint. Her picture book, GRANDMA'S GLOVES, won the California Book Award Gold Medal. She lives in Los Angeles.
Loading...
or
Not Currently Available for Direct Purchase