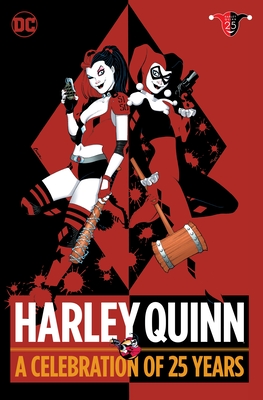 A Celebration of 25 Years

The true embodiment of the phrase “madly in love,” Harley Quinn may be stark, raving, cuckoo-pants crazy, but she is a woman who stands by her man. Filled with an inexplicable devotion to Batman’s nemesis, the Joker, she’s the Clown Prince of Crime’s most loyal companion.

But while her monstrous “Mistah J” may have led her to a life of crime, he also brought her comic book superstardom! It’s been 25 years since she made her debut, but Harley Quinn’s popularity continues to grow, spreading from animation to comic books to video games to live-action feature films, with no sign of slowing down.

Paul Dini is a multiple Emmy and Eisner Award winning writer and producer who has helped redefine the legends of the DC Universe in such series as The New Batman/Superman Adventures, Batman Beyond, Kyrpto and Justice League Unlimited. In doing so, he co-created one of the most popular characters in comics in Harley Quinn, who originated as a character in Batman: The Animated Series. In comics he has authored The World's Greatest Super-Heroes, illustrated by Alex Ross. Dini has also collaborated with Chip Kidd on Batman Animated for HarperCollins.
Loading...
or support indie stores by buying on