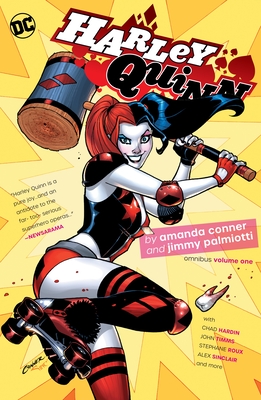 Surrounded by freak shows, oddities, and hot dog stands, Harley Quinn has never been more at home than at her new address on the world-famous Coney Island boardwalk. Her on-again, off-again relationship with a certain psychotic clown has finally ended (with a bang!), but there’s no such thing as a fresh start when you’re a former super-villain. And Harley’s new life is quickly complicated by a steady stream of creeps and criminals just begging for a Harley Quinn butt-kicking!

"Conner's characters are expressive in all the right ways, understated, and inherently emotional."--MTV Geek

"The secret to this book's surprisingly sweet appeal is Amanda Conner."--Newsarama

"[Conner's] work is so irresistibly beautiful and evocative."--Craveonline

"It's silly, it's funny, it's irreverent."--Comic Book Resources

"Every bit as chaotic and unabashedly fun as one would expect."--IGN

"Harley Quinn is a pure joy as a self-referential comedic anti-villain, and an antidote to the far too serious superhero operas that it shares its universe with."--Newsarama

Amanda Conner started out in comics after working as an illustrator for New York ad agencies. However, loving comic books and cartooning the most, Amanda found work at Archie, Marvel and Claypool Comics early in her career. She's probably best known for her work on VAMPIRELLA for Harris Comics, as well as PAINKILLER JANE, CODENAME KNOCKOUT, BIRDS OF PREY and the creator-owned books GATECRASHER and THE PRO (with Jimmy Palmiotti and Garth Ennis).

Jimmy Palmiotti is a multi-award-winning comic book creator with a wide range of experience in advertising, production, editorial, film writing and production, media presentation and video game development. He has created and co-created numerous series and characters, including THE NEW WEST, THE MONOLITH, 21 DOWN, THE RESISTANCE, GATECRASHER, BEAUTIFUL KILLER, BACK TO BROOKLYN, THE TATTERED MAN and PAINKILLER JANE. He has co-written DC's ALL-STAR WESTERN and BATWING with Justin Gray, as well as HARLEY QUINN and STARFIRE with Amanda Conner.
or
Not Currently Available for Direct Purchase