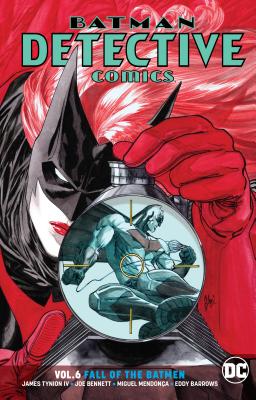 Fall of the Batmen

Red Robin has returned, resuming his work in Gotham City as well as his romance with Stephanie Brown, the Spoiler. These two, along with Batwoman, Clayface, Batwing, Azrael and Orphan, help Batman reduce the threat of crime to the citizenry.

But their success comes with a horrible price.

The First Victim and his Victim Syndicate want one thing: to make Batman pay. They have turned the whole city against the Batmen in protest, abducted Clayface and threatened to release all of Arkham Asylum's most dangerous villains if Batman doesn't unmask on live television.

Everything Red Robin has built to ensure a new future for the team could crumble if the Victim Syndicate triumphs...or if one member of the team makes a detrimental decision that could tear them apart.

Plus, a full-length look at Basil Karlo's tortured life, from being the son of a distant man-of-a-thousand-faces father to the accident that turned the rising celebrity into the shape-changing Clayface.

Praise For Batman - Detective Comics Vol. 6: Fall of the Batmen…

"DETECTIVE COMICS has been one of the absolute stand-out comics from the DC Rebirth." --Comics Alliance

"Captivating... truly sets the bar for what an ideal team book should be." --Newsarama

James Tynion IV started in the comics business assisting Scott Snyder in writing backup stories for Snyder's groundbreaking BATMAN series. Tynion soon began writing TALON, a series that spun out of the hugely popular "Batman: The Court of Owls" storyline. He has also written CONSTANTINE: THE HELLBLAZER and RED HOOD AND THE OUTLAWS and is currently at the helm of BATMAN - DETECTIVE COMICS.
Loading...
or
Not Currently Available for Direct Purchase