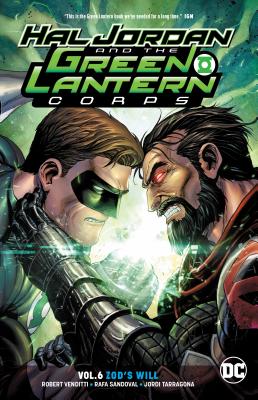 When Green Lanterns Hal Jordan and Kyle Rayner arrive on a primitive planet to investigate reports of alien interference with the local population, they're shocked to discover that Superman's Kryptonian foe General Zod and his family have taken over the planet, not as conquerors, but as gods who are being eagerly worshipped!

When an exploratory mission becomes a battle royale with foes each as powerful as the Man of Steel, Kyle is badly injured and Hal is captured. Will a rogue rescue mission led by Guy Gardner, Kilowog and other rebellious Lanterns be successful? Or are they actually playing into master strategist Zod's larger plans?

Meanwhile, Green Lantern John Stewart helps restore the Guardians of the Universe to a critical role in leading the Green Lantern Corps. But are his efforts too successful?

Praise For Hal Jordan and the Green Lantern Corps Vol. 6…

Praise for Hal Jordan and the Green Lantern Corps:

"This is the Green Lantern book we've needed for a long time." --IGN

"Every issue is packed with action." --Comicosity

Robert Venditti is the New York Times best-selling author of The Homeland Directive and the sci-fi graphic novel series The Surrogates, the first installment of which was adapted into a feature film starring Bruce Willis and Ving Rhames. He also writes the graphic novel adaptations of Rick Riordan's bestselling Percy Jackson and the Olympians novels. His most recent projects include X-O Manowar, Green Lantern and The Flash.
Loading...
or
Not Currently Available for Direct Purchase