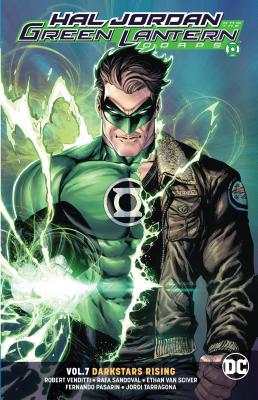 When the last surviving Controllers--ancient beings who hope to outdo the Guardians at bringing justice to the universe--revive the Darkstars, the result is a force beyond even their control!

Beginning with a disgraced Green Lantern who is recruited right before Hal Jordan's disbelieving eyes, the Darkstars quickly form an army of armored law enforcers who face every villain with lethal, unrelenting force ... an army whose numbers and power dwarf that of all the Lanterns combined!

But while Hal Jordan, John Stewart and Kyle Rayner search the universe for unlikely allies--from the New Gods to Hector Hammond to even General Zod--the Darkstars have found an unexpected new recruit of their own! Will Guy Gardner become the one foe Hal Jordan and the Corps cannot hope to defeat?

Praise for Hal Jordan and the Green Lantern Corps

“This is the Green Lantern we’ve needed for a long time.” —IGN

“Great action, killer art, and a major turning point for an iconic villain. Give me more DC! I want it!” —SciFi Pulse

“Every issue is packed with action!” —Comicosity

Robert Venditti is the New York Times best-selling author of THE HOMELAND DIRECTIVE and the sci-fi graphic novel series THE SURROGATES, the first installment of which was adapted into a feature film starring Bruce Willis and Ving Rhames. He also writes the graphic novel adaptations of Rick Riordan's bestselling Percy Jackson and the Olympians novels. His most recent projects include X-O MANOWAR, GREEN LANTERN and THE FLASH.
Loading...
or
Not Currently Available for Direct Purchase