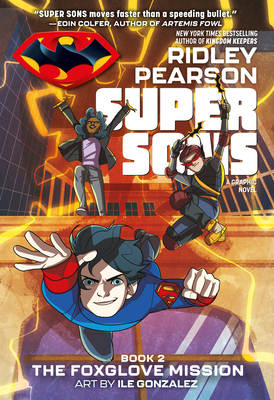 The Foxglove Mission is the rare sequel that takes everything readers love about Super Sons and raises the stakes without losing any of the charm or sense of wonder. Join New York Times bestselling author Ridley Pearson (Kingdom Keepers) and artist Ile Gonzalez as they introduce new settings, new allies and villains, and an all-new adventure in this latest action-packed chapter!

In the aftermath of The Polar Shield Project, Jon Kent and Damian "Ian" Wayne are on the run! With their hometown in ruins and in the absence of their heroic fathers, Jon and Ian are on a mission to find a sample of the deadly virus that's threatening Wyndemere and Jon's mother, Lois Lane. Meanwhile, Candace follows clues that hold the key to her destiny as she unlocks powerful abilities she never knew existed. While their quests threaten to divide the three of them, it's only through teamwork and trust that they can succeed.