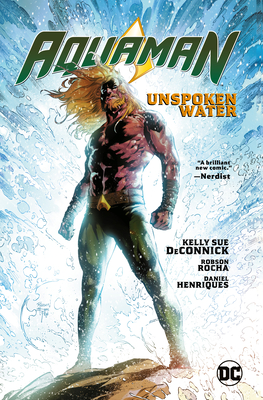 He's lost his memory. And his kingdom. Can Arthur Curry find the hero within in order to reclaim his throne?

He's lost his kingdom. He's lost his memory. He may even have lost his mind. He is Arthur Curry, the Lord of Atlantis, a founding member of the Justice League...and he has no idea where he is, how he got there...or how to escape.

The maritime monarch has washed up on the shore of a remote island where nothing is as it seems. In the mysterious town of Unspoken Water, the people fear the wrathful sea. Aquaman befriends an enigmatic young villager named Caille--but he dreams of a redheaded woman with whom he shares an unbreakable bond.

But even as his queen Mera attempts to locate the amnesiac Arthur, a new enemy is rising out of the depths...

“Everybody thinks that he’s the goofy guy who talks to fish. Kelly Sue DeConnick morphs Aquaman’s ‘silly’ talent into a true superpower.“—Polygon

"It’s a great time to be an Aquaman fan.”—Nerdist

”DeConnick has another sure fire hit.”—SyFy Wire