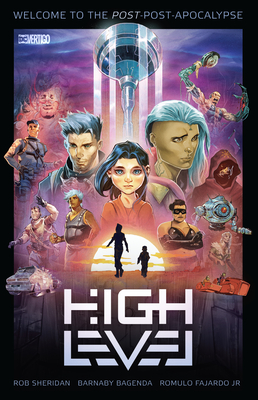 AFTER THE END OF THE WORLD, THERE'S NOWHERE TO GO BUT UP

Hundreds of years ago, the apocalypse came--and went.

For the self-interested smuggler called Thirteen, the religious cults, witch tribes, mutants, mafias, false prophets, real prophets, sunken cities, and cybernetic sprawl that have arisen in the centuries since civilization collapsed are the only world she's ever known. Until a child called Minnow comes into her life...and changes everything.

Thirteen learns that this mysterious kid might just have the power of a messiah. To uncover the truth, she must safely transport Minnow to a place called High Level. It's a city at the top of the world. No one's sure if it even really exists. But one thing's for certain: no one who's gon looking for it has ever returned.

Can a smuggler and a savior survive the desperate, dangerous multi-thousand-mile journey to their destination? And if they reach High Level, will they like the view from the top?

Travel to a time and place above and beyond anything you've experienced before in High Level - a provocative post-apocalyptic adventure from the mind of Rob Sheridan, the Grammy award-nominated visionary co-creator of Nine Inch Nails' groundbreaking Year Zero alternate-reality game! Featuring stunning art by Barnaby Bagenda (The Omega Men) and a bonus galley of previously unpublished art, this volume collects High Level #1-6.

Barnaby Bagenda and Romulo Fajardo Jr. were the art team behind DC's New York Times best-selling The Omega Men: The End Is Here graphic novel by Tom King.
Loading...
or
Not Currently Available for Direct Purchase