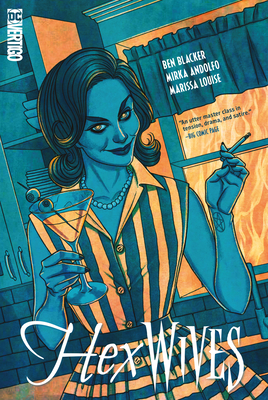 An ancient battle of the sexes has raged for centuries, but a strange calm has befallen the age-old conflict as of late. How were the witches subdued, and what will happen when they remember how to wield their true power?

The war went on for centuries--on one side, a coven of perpetually reincarnating witches, dedicated to cultivating their otherworldly abilities and guarding their independence; on the other, an all-male conspiracy of witch hunters known as the Architects, determined to put an end to the power of their nigh-immortal adversaries for good. Neither could land a decisive blow and the result was stalemate.

Until 2005, when everything changed.

Now, coven leader Isadora is a happy wife with a happy life in a cozy, quiet cul-de-sac in the town of Desert Canyon. She has no recollection of her many past lives; no memory of her membership in an ancient order of necromancers; no reminders of the endless war it waged; and no idea of the power that she and the other housewives of Desert Canyon possess.

But you can't keep a good witch down--and these ladies are the best. Once they find out the truth about their white-picket prison, the men that they thought they knew are going to have hell to pay.

Ben Blacker is a writer and producer best known for his work on Supernatural and Thrilling Adventure Hour Live.