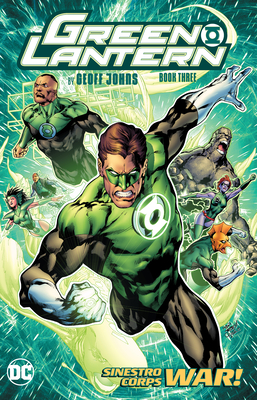 Sinestro--Hal Jordan's former mentor and ongtime archnemesis--has gathered an army of soldiers fueled by the fear they instill in others, consisting of Arkillo, Karu-Sil, the Cyborg Superman and hundreds more of the most terrifying villains the universe has ever seen! Former Green Lantern Kyle Rayner has been possessed by the entity known as Parallax and now assists the Sinestro Corps in cutting a swath of evil across the universe. Trapped in the depths of the Sinestro Corps' Citadel and face to face with the Guardian of Sinestro's army of fear, Hal Jordan must find the will power to battle these terrible foes. And as one of the Book of Oa's prophecies comes true, the Green Lantern Corps makes a last stand that reveals the reincarnation of one of their fold!

Geoff Johns is an award-winning writer and one of the most popular contemporary comic book writers today. Johns is the author of the New York Times best-selling graphic novels Aquaman: The Trench, Blackest Night, Green Lantern: The Sinestro Corps War, Justice League: Origin, Superman: Brainiac and Batman: Earth One which hit number one on the bestseller list. He is also known for transforming Green Lantern into one of the most critically and commercially successful franchises in comics. Johns has written for various other media, including episodes of Smallville, Arrow, and Adult Swim's Robot Chicken, for which he was nominated along with his co-writers for an Emmy. He is the Chief Creative Officer of DC Entertainment and resides in Los Angeles, California.

Ethan Van Sciver has been drawing comics and comic book characters since he was four years old. Back then, DC wouldn't return his phone calls. Now he's working with the best writer, inker, colorist, and editorial team in the business. Persistence is key. At home, Ethan likes to watch terrible old movies, listen to surf music, and play Hot Wheels with his son, Hunter. He blames his expanding waistline on the fabulous gourmet cooking of his wife, Sharis, but admits it's also probably due to a lot of long workdays putting more lines on Sinestro's face and eating cookies.
Loading...
or support indie stores by buying on