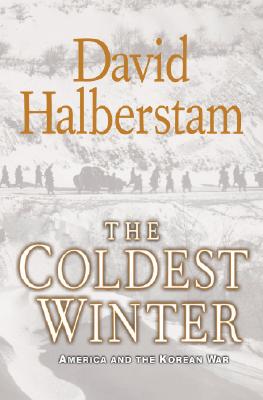 America and the Korean War

“The late Halberstam's last work examines the causes, course, and lasting effects of the Korean War. While focusing on the bravery of the fighting men on both sides of the conflict, he shows the effect of poor strategic thinking by military and civilian leaders and provides vivid accounts of daily battles on the field and in the world capitals where the fighting is directed. A dense historical context offers a better understanding of the forces and events that shaped the war and its aftermath.”
— John Pollock, Hickory Stick Bookshop, Washington Depot, CT
View the List

"In a grand gesture of reclamation and remembrance, Mr. Halberstam has brought the war back home."
--The New York Times David Halberstam's magisterial and thrilling The Best and the Brightest was the defining book about the Vietnam conflict. More than three decades later, Halberstam used his unrivaled research and formidable journalistic skills to shed light on another pivotal moment in our history: the Korean War. Halberstam considered The Coldest Winter his most accomplished work, the culmination of forty-five years of writing about America's postwar foreign policy. Halberstam gives us a masterful narrative of the political decisions and miscalculations on both sides. He charts the disastrous path that led to the massive entry of Chinese forces near the Yalu River and that caught Douglas MacArthur and his soldiers by surprise. He provides astonishingly vivid and nuanced portraits of all the major figures-Eisenhower, Truman, Acheson, Kim, and Mao, and Generals MacArthur, Almond, and Ridgway. At the same time, Halberstam provides us with his trademark highly evocative narrative journalism, chronicling the crucial battles with reportage of the highest order. As ever, Halberstam was concerned with the extraordinary courage and resolve of people asked to bear an extraordinary burden.The Coldest Winter is contemporary history in its most literary and luminescent form, providing crucial perspective on every war America has been involved in since. It is a book that Halberstam first decided to write more than thirty years ago and that took him nearly ten years to complete. It stands as a lasting testament to one of the greatest journalists and historians of our time, and to the fighting men whose heroism it chronicles.

David Halberstam is one of America's most distinguished journalists and historians. After graduating from Harvard in 1955, he covered the beginnings of the Civil Rights movement, then was sent overseas by the New York Times to report on the war in Vietnam. He won the Pulitzer Prize for his Vietnam reporting at the age of 30. His last fourteen books (which include THE BEST AND THE BRIGHTEST and Hyperion's FIREHOUSE and TEAMMATES) have all been New York Times bestsellers. He lives in New York City.
Loading...
or
Not Currently Available for Direct Purchase