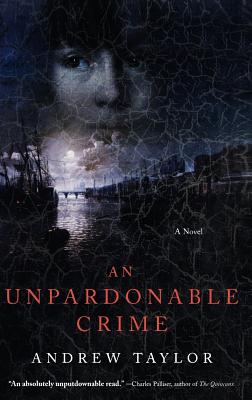 An irresistible literary thriller in the tradition of The Alienist and An Instance of the Fingerpost, set in early 1800s England and involving a young Edgar Allan Poe. Edgar Allan Poe is an American boy in England, a child standing on the edge of mysteries. In 1819, two Americans arrive in London. Soon afterward a bank collapses. A man is found horribly mutilated on a building site and an heiress flirts with her inferiors. All the while, Poe's young schoolmaster struggles to understand what is happening before he and his loved ones are destroyed. But the truth, like the youthful Poe himself, has its origins in the New World as well as the Old--in a bitter episode of corruption during the War of 1812.

With settings ranging from the coal-scented urban jungle of late Regency London to the stark winter landscapes of rural Gloucestershire, An Unpardonable Crime is a multilayered literary murder mystery, a historical novel, and a love story. In addition to shedding fascinating light on Edgar Allan Poe, the book is a fast-paced suspenseful read, filled with shocking revelations.

Andrew Taylor is the author of many crime and suspense novels. The recipient of the Crime Writers' Association 2009 Cartier Diamond Dagger for sustained excellence in crime writing, Taylor has also won the CWA's John Creasey Award, an Edgar Scroll from the Mystery Writers of America, an Audie, and two CWA's Ellis Peters Historical Daggers (a unique achievement), as well as a shortlisting for the CWA's Gold Dagger. His website is www.andrew-taylor.co.uk.
Loading...
or support indie stores by buying on