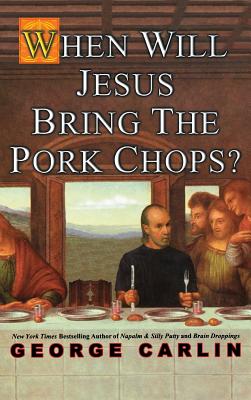 When Will Jesus Bring the Pork Chops?

On the heels of George Carlin's #1 New York Times bestseller Napalm & Silly Putty comes When Will Jesus Bring the Pork Chops? -- infused with Carlin's trademark irreverent humor and biting cultural observations. Here we go again . . . George Carlin's hilarious When Will Jesus Bring the Pork Chops? offers his cutting-edge opinions and observational humor on everything from evasive euphemistic language to politicians to the media to dead people. Nothing and no one is safe! Despite the current climate of political correctness, Carlin is not afraid to take on controversial topics: The thinking person's comic who uses words as weapons, Carlin puts voice to issues that capture the modern imagination. For instance, why are there Ten Commandments? Are UFOs real? What will the future really be like? This brand-new collection tackles all that and more. In When Will Jesus Bring the Pork Chops? Carlin's razor-sharp observations demolish everyday values and leave you laughing out loud--delivering exactly what his countless fans have been waiting for.

George Carlin, author of three bestsellers, released twenty-three comedy albums; appeared in sixteen feature films; wrote and performed fourteen HBO specials; received four Grammy Awards; and was nominated for five Emmys. He was the 2008 recipient of the Mark Twain Prize for American Humor. He died in 2008.
Loading...
or support indie stores by buying on