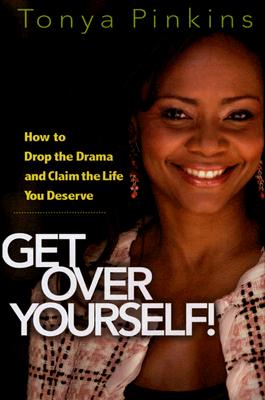 How to Drop the Drama and Claim the Life You Deserve

Most of us think we know what we want, and even why we can't get it. In her frank and inspiring book, Tonya Pinkins, star of television and Broadway, shows readers techniques and exercises that help them develop their own processes for obtaining their goals. This is tough love, Tonya style.

In addition to being an actress and singer, Tonya has helped hundreds of people with her catalytic motivational seminars. She herself has seen the heights and the depths: from teen star to Tony Award winner to divorced mother on welfare to spiritual student to soaring success and unstoppable celebrity, delivering her magnificent solo performance at the 2004 Tony Awards show. In Get Over Yourself!, she takes the principles that helped her to succeed and puts them into a book that reaches out and grabs readers searching for a better way of life.

Tonya Pinkins is a Tony Award-winning actress, soap opera regular, and star of the critically acclaimed hit Broadway musical Caroline, or Change. She also starred in Jelly's Last Jam, and has been featured on ABC's All My Children. She teaches The Actorpreneurial Attitude, a course for Actors that instructs participants in how to remove hidden emotional blocks to success. She lives on both coasts, and lectures around the country.
Loading...
or support indie stores by buying on