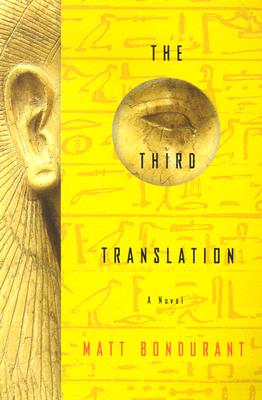 An ancient mystery, a hidden language, and the secrets of a bizarre Egyptian sect collide in modern-day London in this ingenious novel of seduction, conspiracy, and betrayal alter Rothschild is an American Egyptologist living in London and charged by the British Museum with the task of unlocking the ancient riddle of the Stela of Paser, one of the last remaining real-life hieroglyphic mysteries in existence today. The secrets of the stela-a centuries-old funerary stone-have evaded scholars for thousands of years due to the stela's cryptic reference to a third translation:

Matt Bondurant began working on this novel while living and working in London, and finished it while employed at the British Museum, where he first saw the actual Stela of Paser and learned of its elusive and mysterious third translation. A professor at George Mason University and two-time Bread Loaf scholarship winner, his short stories have appeared in Glimmer Train, the New England Review, and numerous other publications. He lives in Alexandria, Virginia.
Loading...
or
Not Currently Available for Direct Purchase