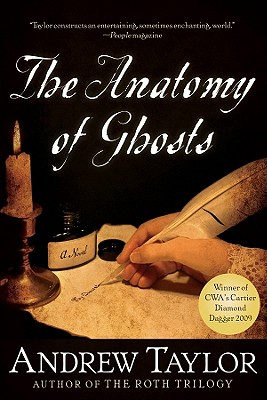 The Anatomy of Ghosts

“I was blown away by the novel set in 1780s Cambridge. Filled with intriguing characters, sharp and witty dialogue, and a plot that keeps you guessing, Taylor's novel is a gem. This is a must for historical fiction fans and mystery enthusiasts. Happy Reading!”
— Ken Favell, Books & Company, Oconomowoc, WI
View the List

1786, Jerusalem College, Cambridge The ghost of Sylvia Whichcote is rumored to be haunting Jerusalem ever since student Frank Oldershaw claimed to have seen the dead woman prowling the grounds and was locked up because of his violent reaction to these disturbed visions. Desperate to salvage her son's reputation, Lady Anne Oldershaw employs John Holdsworth, author of The Anatomy of Ghosts -- a stinging account of why ghosts are mere delusion--to investigate. But his arrival in Cambridge disrupts an uneasy status quo as he glimpses a world of privilege and abuse, where the sinister Holy Ghost Club governs life at Jerusalem more effectively than the Master, Dr. Carbury, ever could. And when Holdsworth finds himself haunted--not only by the ghost of his dead wife, Maria, but also by Elinor, the very-much-alive Master's wife--his fate is sealed. He must find Sylvia's murderer, or else the hauntings will continue. And not one of this troubled group will leave the claustrophobic confines of Jerusalem unchanged. CWA Cartier Diamond Dagger winner Andrew Taylor returns with an outstanding historical novel that will simultaneously keep the reader riveted, and enchant with its effortless elegance.

Andrew Taylor is the author of many crime and suspense novels. The recipient of the Crime Writers' Association 2009 Cartier Diamond Dagger for sustained excellence in crime writing, Taylor has also won the CWA's John Creasey Award, an Edgar Scroll from the Mystery Writers of America, an Audie, and two CWA's Ellis Peters Historical Daggers (a unique achievement), as well as a shortlisting for the CWA's Gold Dagger. His website is www.andrew-taylor.co.uk.
Loading...
or
Not Currently Available for Direct Purchase