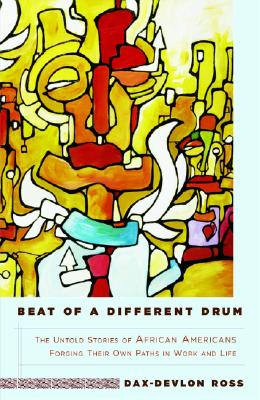 Beat of a Different Drum (Paperback)

In a series of insightful, probing interviews, Dax-Devlon Ross gives voice to the less-acknowledged realms of the black experience and gives us all new role models of courage, iconoclasm, and creativity. Ross, an inner-city schoolteacher who eschewed a career in law, became aware of the need for a book like this one when he came to his own career crossroads. To write it, he criss-crossed the country and even traveled to Europe, talking to black Americans who have stepped outside their comfort zones and found lives that no one had ever imagined they'd lead. In Beat of a Different Drum, you'll meet: . . . as well as many others, each of whose stories has something unique to teach us about the search for meaning in one's lifework, and the challenges that we must still face when we march to the beat of a different drum.

Praise For Beat of a Different Drum: The Untold Stories of African Americans Forging Their Own Paths in Work and Life…

"Beat of a Different Drum is a serious feat of journalism, yet it exhibits an honesty of narration that journalism usually lacks. It tackles some heady issues, from the purpose of our existence to the meaning of race in a less-stereotyped world. Dax Devlon-Ross is a strong new voice, and one we will be hearing often."—Po Bronson, author of What Will I Do with My Life?

"Dax-Devlon Ross's clear-eyed subjects present themselves as unique Americans, men and women of variety and depth, cognizant of their place in society, yet varied in their opinions, hues, and occupations. They are wondrously amazed by the joy and pains of their self created lives. I'm glad Dax-Devlon Ross allowed me to meet them."—James McBride, author of The Color of Water and Miracle at St. Anna
or support indie stores by buying on
Copyright © 2020 American Booksellers Association