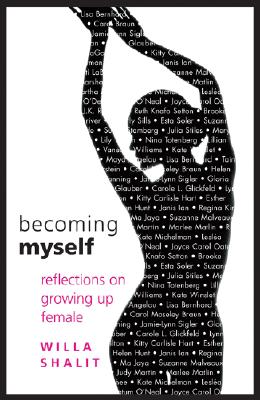 Reflections on Growing Up Female

In the tradition of The Right Words at the Right Time, a collection of original essays on the joys, trials, and unexpected outcomes of growing up female by dozens of celebrities, writers, and exceptional women An inspiring collection of essays from a wide range of notable women, on the experience of being female. Sixty-seven original essays from celebrities and writers, including Meryl Streep, Kate Winslet, J.K. Rowling, Julia Stiles, Maya Angelou, Kate Spade, Helen Hunt, Zane, Patti LaBelle, Joyce Carol Oates, Lily Tomlin, and many more. Subjects covered include everything from how it felt for Vanessa Williams to be stripped of her Miss America crown to Meryl Streep's definition of real freedom. The essays are funny, poignant, indignant, nostalgic, and powerfully female.

Willa Shalit is the daughter of Gene Shalit and was the producer for The Vagina Monologues, which became a global phenomenon. She is also the co-founder and first Executive Direct of V-Day, the worldwide movement to end violence against women that grew out of the play. It was named one of Fortune's 100 Best American Charities of 2002. Shalit is also an internationally recognized sculptor and is the founder of The Touch Foundation, creating the Please Touch! Exhibition, which allowed the sight-impaired for the first time to "see" people of all races as well as famous people whose face they had only imagined. Shalit is the subject of the Emmy-winning PBS documentary Willa: Behind the Mask, and author of the book Lifecast: Behind the Mask.
Loading...
or
Not Currently Available for Direct Purchase