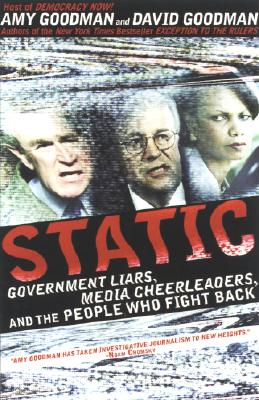 Government Liars, Media Cheerleaders, and the People Who Fight Back

Torture. Kidnapping. Bogus wars. Illegal wiretapping. Propaganda. Spies in the newsrooms. Oil profiteers. Soldiers who won't fight. Mothers of fallen soldiers Who will. In Static, the bestselling brother-sister team of Amy Goodman, host of Democracy Now!, and investigative journalist David Goodman takes on government liars, corporate profiteers, and the media that have acted as their cheerleaders. The authors cut through the official static to show the truth about war, torture, and government control of the media. Static breaks the sound barrier to present the voices of dissidents, activists, and others who are often frozen out of official debate. Read Static. Become informed. Fight back. Defend democracy.

Amy Goodman is an internationally acclaimed journalist. She has won many of the most prestigious awards in journalism, including the George Polk Award, the Alfred I duPont-Columbia University Award, and the Robert F. Kennedy Prize for International Reporting. Democracy Now! airs on more than 200 radio and TV stations around the world. David Goodman is an award-winning independent journalist whose articles have appeared in The Washington Post, Mother Jones, Outside, The Nation, and numerous other publications. He is the author most recently of the critically acclaimed Fault Lines: Journeys into the New South Africa. He lives with his wife and two children in Vermont.
Loading...
or support indie stores by buying on