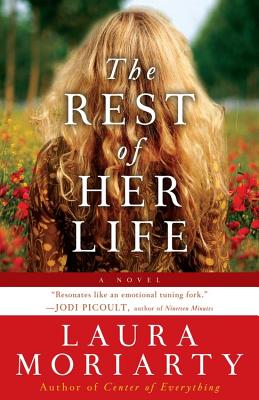 The Rest of Her Life

“Filled with aching, lyrical passages that reveal the frailty of family, Moriarty's finely balanced writing illuminates the strained relationship of mother and daughter in the wake of tragedy. I will be gently pressing this book into hands of women and whispering, 'Read this.'”
— Danielle Marshall, Powell's City of Books, Portland, OR
View the List

In The Rest of Her Life, Laura Moriarty delivers a luminous, compassionate, and provocative look at how mothers and daughters with the best intentions can be blind to the harm they do to one another.

Leigh is the mother of high-achieving, popular high school senior Kara. Their relationship is already strained for reasons Leigh does not fully understand when, in a moment of carelessness, Kara makes a mistake that ends in tragedy -- the effects of which not only divide Leigh's family, but polarize the entire community. We see the story from Leigh's perspective, as she grapples with the hard reality of what her daughter has done and the devastating consequences her actions have on the family of another teenage girl in town, all while struggling to protect Kara in the face of rising public outcry.

Like the best works of Jane Hamilton, Jodi Picoult, and Alice Sebold, Laura Moriarty's The Rest of Her Life is a novel of complex moral dilemma, filled with nuanced characters and a page-turning plot that makes readers ask themselves, "What would I do"

Laura Moriarty received her master's degree from the University of Kansas and was awarded the George Bennett Fellowship for Creative Writing at Phillips Exeter Academy. She is the author of The Center of Everything. She lives in Lawrence, Kansas.

How important is the setting to this story? Would the same situation have played out differently in a larger town, a suburb, or a city? What do you think would have been the same?

At the beginning of the novel, Leigh believes she likes living in a small town like Danby because she likes the sense of community it offers. Is she really a part of this community? How does Leigh’s relationship to the town change over the summer?

When Leigh accuses Eva of being a gossip, Eva defends herself by saying she just cares about what’s happening in the lives of people in her community. Do you buy this? Leigh spends a lot of time worrying about what people are saying about her family, but is gossip ever a positive force in the story? Do you like Eva? Why or why not?

After hearing Eva deny being a gossip, Leigh is stunned: “People didn’t see themselves, she considered. It was almost eerie when you saw it face to face.” Who else in the novel might not see herself or himself clearly? Does anyone? Do you think of this selective “vision” as a conscious choice or a true inability?

The first time the bereaved mother confronts Kara, it is Leigh — not Gary — who steps in to protect her. Leigh believes she recognizes something in Diane Kletchka, something we can assume Gary does not. What do you think it is about Diane that feels familiar to Leigh?