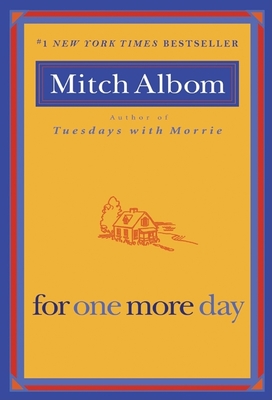 For One More Day

For One More Day is the story of a mother and a son, and a relationship that covers a lifetime and beyond. It explores the question: What would you do if you could spend one more day with a lost loved one?

As a child, Charley "Chick" Benetto was told by his father, "You can be a mama's boy or a daddy's boy, but you can't be both." So he chooses his father, only to see the man disappear when Charley is on the verge of adolescence.

Decades later, Charley is a broken man. His life has been crumbled by alcohol and regret. He loses his job. He leaves his family. He hits bottom after discovering his only daughter has shut him out of her wedding. And he decides to take his own life.

He makes a midnight ride to his small hometown, with plans to do himself in. But upon failing even to do that, he staggers back to his old house, only to make an astonishing discovery. His mother--who died eight years earlier--is still living there, and welcomes him home as if nothing ever happened.

What follows is the one "ordinary" day so many of us yearn for, a chance to make good with a lost parent, to explain the family secrets, and to seek forgiveness. Somewhere between this life and the next, Charley learns the astonishing things he never knew about his mother and her sacrifices. And he tries, with her tender guidance, to put the crumbled pieces of his life back together.

Through Albom's inspiring characters and masterful storytelling, readers will newly appreciate those whom they love--and may have thought they'd lost--in their own lives. For One More Day is a book for anyone in a family, and will be cherished by Albom's millions of fans worldwide.

In the first paragraph of the novel, and repeated several times throughout the book, is the line “every family is a ghost story.” What do you think that means? Who is the real ghost in the Benetto family?

Which scene resonated with you the most, and why?

Re-read the “Beginning” section. Now that you know the identity of the narrator, how does your understanding of the section change? Did the narrator’s identity surprise you? Why, or why not?

Discuss the last paragraph of the “Beginning” section, on page 4: “Have you ever lost someone you love and wanted one more conversation, one more chance to make up for the time when you thought they would be here forever? If so, then you know you can go through your whole life collecting days, and none will outweigh the one you wish you had back. What if you got it back?” What did you imagine this meant when you first read it? What does it mean to you now? Is there someone in your own life with whom you’d like to spend one more day?

Why do you think Chick tried to commit suicide? Was it for the reasons he stated, or was there something else behind it?

On page 7, Chick says “Mothers support certain illusions about their children.” What did he mean by that statement? What about fathers?

Consider the passage on page 10 in which Chick talks about missing his daughter’s wedding. Given the identity of the book’s narrator, what do you think is happening here? Is it manipulation, guilt, hubris, or something else entirely?

Several times in the novel, Chick says that you can either be a mama’s boy or a daddy’s boy, but not both. Which was Chick? Which did he believe himself to be? Do you agree that you can only be one or the other?

On page 36, Chick says, “kids chase the love that eludes them.” How does this play out over the course of the novel? Whose love does he chase, ultimately, and why?

Throughout the novel, Chick outlines various times when he failed to stand up for his mother, and was often quite cold to her. Is there a special cruelty that children inflict on their parents? Is Chick cruel to other characters?

Novels about mother-son relationships are relatively rare. Can you think of any others you’ve read and enjoyed? How did their portrayals compare to For One More Day?

On page 151, a mountain climber tells Chick that descending is much more difficult than ascending: “The backside of a mountain is a fight against human nature. You have to care as much about yourself on the way down as you did on the way up.” Do you agree with this statement? Where were Chick’s ascents and descents? How did he deal with them?

Discuss the significance of the Old Timers’ Game—its timing, Chick’s deception, his father’s involvement. How is it a turning point?