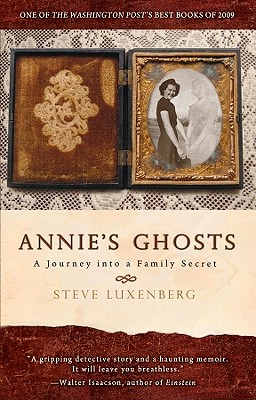 A Journey into a Family Secret

“Every family has a secret. Steve Luxenberg discovers his shortly before his mother dies in her eighties. While she had told everyone throughout his life that she was an only child, his mother actually had a sister who had been institutionalized in her twenties. Luxenberg's journalistic approach to discovering the truth about his aunt is fascinating, as he mines the underlying story of secrets and their effects on families. A great reading group nonfiction pick.”
— Valerie Koehler, Blue Willow Bookshop, Houston, TX
View the List

Beth Luxenberg was an only child. Or so everyone thought. Six months after Beth's death, her secret emerged. It had a name: Annie. Steve Luxenberg's mother always told people she was an only child. It was a fact that he'd grown up with, along with the information that some of his relatives were Holocaust survivors. However, when his mother was dying, she casually mentioned that she had had a sister she'd barely known, who early in life had been put into a mental institution. Luxenberg began his researches after his mother's death, discovering the startling fact that his mother had grown up in the same house with this sister, Annie, until her parents sent Annie away to the local psychiatric hospital at the age of 23.

Annie would spend the rest of her life shut away in a mental institution, while the family erased any hints that she had ever existed. Through interviews and investigative journalism, Luxenberg teases out her story from the web of shame and half-truths that had hidden it. He also explores the social history of institutions such as Eloise in Detroit, where Annie lived, and the fact that in this era (the 40s and 50s), locking up a troubled relative who suffered from depression or other treatable problems was much more common than anyone realizes today.

Steve Luxenberg has been a senior editor with the Washington Post for 20 years. He lives in Baltimore, MD. This is his first book.

Praise For Annie's Ghosts: A Journey into a Family Secret…

"Annie's Ghosts is one of the most remarkable books I have ever read . . . From mental institutions to the Holocaust, from mothers and fathers to children and childhood, with its mysteries, sadness, and joy--this book is one emotional ride."—Bob Woodward, author of The War Within and State of Denial

"I started reading within minutes of picking up this book, and was instantly mesmerized. It's a riveting detective story, a moving family saga, an enlightening if heartbreaking chapter in the history of America's treatment of people born with what we now call special needs."—Deborah Tannen, author of You Just Don't Understand and You're Wearing That?

"This is a memoir that pushes the journalistic envelope . . . Luxenberg has written a fascinating personal story as well as a report on our communal response to the mentally ill."—Helen Epstein, author of Where She Came From and Children of the Holocaust
or support indie stores by buying on
Copyright © 2020 American Booksellers Association