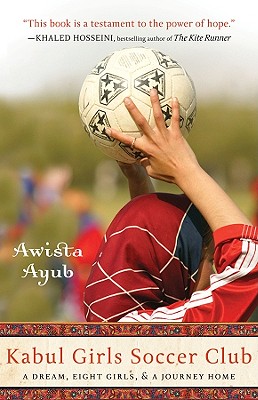 A Dream, Eight Girls, and a Journey Home

A ball can start a revolution.

Born in Kabul, Awista Ayub escaped with her family to Connecticut in 1981, when she was two years old, but her connection to her heritage remained strong. An athlete her whole life, she was inspired to start the Afghan Youth Sports Exchange after September 11, 2001, as a way of uniting girls of Afghanistan and giving them hope for their future. She chose soccer because little more than a ball and a field is needed to play; however, the courage it would take for girls in Afghanistan to do this would have to be tremendous--and the social change it could bring about by making a loud and clear statement for Afghan women was enough to convince Awista that it was possible, and even necessary.

Under Taliban rule, girls in Afghanistan couldn't play outside of their homes, let alone participate in a sport on a team. So, Awista brought eight girls from Afghanistan to the United States for a soccer clinic, in the hope of not only teaching them the sport, but also instilling confidence and a belief in their self-worth. They returned to Afghanistan and spread their interest in playing soccer; when Awista traveled there to host another clinic, hundreds of girls turned out to participate -- and the numbers of players and teams keep growing. What began with eight young women has now exploded into something of a phenomenon. Fifteen teams now compete in the Afghanistan Football Federation, with hundreds of girls participating.

Against all odds and fear, these girls decided to come together and play a sport that has reintroduced the very traits that decades of war had cruelly stripped away from them -- confidence and self-worth. In However Tall the Mountain, Awista tells both her own story and the deeply moving stories of the eight original girls, describing their daily lives back in Afghanistan, and how they found strength in each other, in teamwork, and in themselves -- taking impossible risks to obtain freedoms we take for granted. This is a story about hope, about what home is, and in the end, about determination. As the Afghan proverb says, However tall the mountain, there's always a road.

"The young Afghan women in However Tall the Mountain are pioneers. Their story is one of resilience and courage. This book is a testament to the power of hope and the will to dream in a country where so many dreams have been cut short."—Khaled Hosseini, bestselling author of The Kite Runner and A Thousand Splendid Suns

"Awista Ayub has movingly captured the indomitable spirit of Afghan women in this chronicle of brave girls who risked persecution and worse to pursue the dreams of ordinary childhood. In doing what they love most in life--playing soccer--the girls become emblems of the fight for equality and human rights under the Taliban. Their story reminds us that there is always hope and possibility for a brighter future--even in the wreckage left by war and conflict."
—Secretary of State Hillary Rodham Clinton

Awista Ayub was born in Kabul, Afghanistan, and escaped with her family to Connecticut at 2 years old. Following 9/11, she founded the Afghan Youth Sports Exchange as a means of introducing soccer to the young women of Aghanistan, both on US and Afghan soil. Today, she serves as director of the AYSE and lives in Washington, DC.
Loading...
or support indie stores by buying on