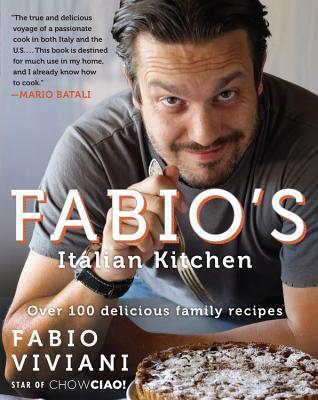 When Fabio Viviani was growing up in a housing project in Florence, Italy, the center of his world was the kitchen, where his mother, grandmother, and especially his great-grandmother instilled in him a love for cooking and good food.

Now he shares the best of Italian home cooking while telling the story of his hardscrabble childhood, his success as a chef in the United States, and the women in his family who inspired him. In more than 150 delicious recipes, Viviani takes us from his family home, where his great-grandmother taught him to make staples like Italian Apple Cake and Homemade Ricotta, to the kitchen of a local trattoria, where he honed his craft cooking restaurant favorites like Gnocchi and the Perfect Tiramisu, and then across Italy where he studied each region's finest recipes, from Piedmont's Braised Ossobuco to Emilia Romagna's Perfect Meat Sauce.

A gorgeously illustrated cookbook, Fabio's Italian Kitchen is a celebration of food and family that brings all the joy, fun, and flair that Fabio Viviani embodies to your kitchen.

Fabio Viviani was born in Florence, Italy, and became a sous chef at Il Pallaio, a trattoria in Firenze, at the age of sixteen. He now works as the owner and executive chef of Cafe Firenze, a renowned Italian restaurant in Ventura County, California, and Osteria Firenze, a Los Angeles Italian eatery. He has appeared on Top Chef (season five), Top Chef All Stars, and Life After Top Chef.
From growing up in a Florentine housing project to charming millions on Top Chef, Italian chef Fabio Viviani blends his amazing personal story with his favorite recipes from his home country.

Fabio shares the best of Italian home cooking while telling the story of his own, hardscrabble Italian childhood (and subsequent success upon arrival in US) and especially the women in his life mother and great grandmother who taught him to cook and inspired him. The book will feature photos and over 150 recipes with stories, including Viviani staples (Italian Apple Cake, 7 Flavors Meat), restaurant favorites (Gnocchi, the Perfect Tiramisu), and recipes from his travels and apprenticeships across different regions of Italy (Braised Ossobuco from Piedmont, the Perfect Meat Sauce from Emilia Romagna).

Born in Florence, Italy, Fabio Viviani began working at Il Pallaio, a Trattoria in Firenze, at the age of 14. Viviani thrived in the high pressure environment and managed to become sous chef two years later. He moved to Ventura County, California at the age of 27 and now works as the owner and executive chef of Cafe Firenze, a renowned Italian restaurant in Moorpark, California, and Firenze Osteria, a popular Los Angeles Italian eatery. He appeared on season 5 of Top Chef and earned a place among the final four contestants. Before he was eliminated from the competition, he was named "Fan Favorite." Viviani returned to Bravo in 2010 to compete in their Top Chef All Stars edition and will appear on Life After Top Chef in fall 2012.
or
Buy Here
Copyright © 2020 American Booksellers Association