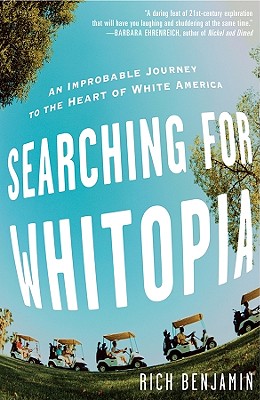 An Improbable Journey to the Heart of White America

As America becomes more and more racially diverse, Rich Benjamin noticed a phenomenon: Some communities were actually getting less multicultural. So he got out a map, found the whitest towns in the USA -- and moved in.

A journalist-adventurer, Benjamin packed his bags and embarked on a 26,909-mile journey throughout the heart of white America, to some of the fastest-growing and whitest locales in our nation. Benjamin calls these enclaves "Whitopias." In this groundbreaking book, he shares what he learned as a black man in Whitopia. Benjamin's journey to unlock the mysteries of Whitopia took him from a three-day white separatist retreat with links to Aryan Nations in North Idaho to exurban mega-churches down South, and many points in between. A compelling raconteur, bon vivant, and scholar, Benjamin reveals what Whitopias are like and explores the urgent social and political implications of this startling phenomenon.

Benjamin's groundbreaking study is one of few to have illuminated in advance the social and political forces propelling the rise of Donald Trump. After all, Trump carried 94 percent of America's Whitopian counties. And he won a median 67 percent of the vote in Whitopia compared to 46 percent of the vote nationwide.

Leaving behind speculation or sensationalism, Benjamin explores the future of whiteness and race in an increasingly multicultural nation.

Praise For Searching for Whitopia: An Improbable Journey to the Heart of White America…

"Benjamin examines the history, politics, economics, and culture of race and class as seen in the growth of these `whitopias,' racially and therefore socioeconomically exclusive communities from the exurb St. George, Utah to the inner-city enclave of Carnegie Hill in Manhattan. . . . This is a thoroughly engaging and eye-opening look at an urgent social issue."—Booklist, Starred Review

"It sounds like a recipe for a riot: an inquisitive black writer journeying into some of the most segregated neighborhoods in the country. But Benjamin...pulls off his quest with good cheer."—Time

"[Benjamin] offers in the end a chilling vision of the future for progressive values."—Daily Kos

"The revelatory chapters about New York City made me want to cry . . . Generous and understanding to all of its subjects, Searching for Whitopia is a eulogy for an unsustainable America lifestyle."—Christian Lander, creator of Stuff White People Like

"A lively and perceptive foray into communities that are trying to bail out of the melting pot."—Mother Jones

"A wry and chilling tour of America's all-white communities."—- Time Out New York

"Benjamin is clear in his conclusion that this trend is not healthy for either white or minority communities. Ideally, he writes, each group should thrive on . . . the influence of the other groups. Already, white communities are suffering from problems like unchecked sprawl and bad schools, and low-income minority groups are also losing access to the social capital of middle-class groups."—Kirkus Reviews

Rich Benjamin is a well-connected scholar, lecturer, and commentator on contemporary American politics and culture. His commentary is featured on NPR, FOX radio, newspapers and the blogosphere, including The Huffington Post, Tom Paine, Afronetizen, and Talking Points Cafe). He has PhD from Stanford University in Modern Thought and Literature in 2001/02, he was a visiting scholar at Columbia Unviersity Law School, and he is currently a senior fellow at DEMOS, a progressive national think tank based in New York City.