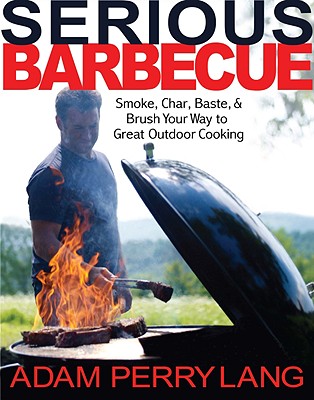 Adam Perry Lang trained with the world's best chefs before giving up four-star kitchens for the thrill of cooking with just meat and fire. Now he's on a mission to turn everyone into an expert.

In Serious Barbecue, Adam Perry Lang has translated his intimate understanding of culinary technique into easy-to-follow advice to help a nation of backyard cooks unleash the raw power of one of the most flavor-packed cuisines around: American barbecue.

Perry Lang begins by breaking down the fundamentals of barbecue--what tools you'll need to begin, how to master cooking with charcoal and wood, how to choose the perfect grill, and more. Then he takes readers on a trip through the butcher's case, describing exactly what makes each kind of meat special, explaining how to select with the skill of a master, and providing his favorite recipes for almost every available cut of pork, beef, veal, lamb, chicken, and turkey.

These original, mouthwatering recipes, which include step-by-step seasoning instructions and a flip-by-flip grilling or smoking guide, will have amateur and expert cooks firing up their barbecues and enjoying perfect results every time--whether they're impressing a group of friends with Perry Lang's insanely delicious Salt and Pepper Dry-Aged Cowboy-Cut Rib Eye or wowing half the neighborhood with his massive, slow-cooking, succulent "Get a Book" Whole Pork Shoulder. Whatever the recipe, his goal is for everyone to achieve the holy grail of barbecuing: bragging rights.

A New York native once described as Daniel Boulud's prot g, Chef Adam Perry Lang fine-tuned his culinary skill in two of France's three-star restaurants before setting his sights on classic American cuisine: barbecue and steakhouse fare. He opened Daisy May's BBQ U.S.A. in New York and Carnevino in Las Vegas to wide acclaim and popularity. Lang continues to compete nationally in barbecue competitions, where in his first year he won Grand Champion honors at the World Pork Expo and first place at the Kansas City American Royal, a.k.a. "The World Series of BBQ."
Loading...
or
Not Currently Available for Direct Purchase