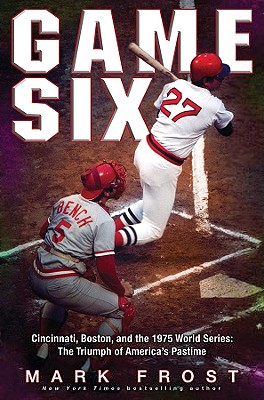 Boston, Tuesday, October 21, 1975. The Red Sox and the Cincinnati Reds have endured an excruciating three-day rain delay. Tonight, at last, they will play Game Six of the World Series. Leading three games to two, Cincinnati hopes to win it all; Boston is desperate to stay alive. But for all the anticipation, nobody could have predicted what a classic it would turn out to be: an extra-innings thriller, created by one of the Big Red Machine's patented comebacks and the Red Sox's improbable late-inning rally; clutch hitting, heart-stopping defensive plays, and more twists and turns than a Grand Prix circuit, climaxed by one of the most famous home runs in baseball history that ended it in the twelfth. Here are all the inside stories of some of that era's biggest names in sports: Johnny Bench, Luis Tiant, Sparky Anderson, Pete Rose, Carl Yastrzemski--eight Hall of Famers in all--as well as sportscasters and network execs, cameramen, umpires, groundskeepers, politicians, and fans who gathered in Fenway that extraordinary night.

Game Six is an unprecedented behind-the-scenes look at what is considered by many to be the greatest baseball game ever played--remarkable also because it was about so much more than just balls and strikes. This World Series marked the end of an era; baseball's reserve clause was about to be struck down, giving way to the birth of free agency, a watershed moment that changed American sports forever. In bestselling author Mark Frost's talented hands, the historical significance of Game Six becomes every bit as engrossing as its compelling human drama.

Praise For Game Six: Cincinnati, Boston, and the 1975 World Series: The Triumph of America's Pastime…

"Mark Frost, author of one of the sport's all-time great books, The Greatest Game Ever Played, produces another wonderful telling of a true tale . . . in The Match."—Chicago Tribune

"Frost captures an elusive magic in this improbable matchup and what it meant for those who played and witnessed it."—Publishers Weekly

"It's difficult to beat a good golf book, be it a good yarn or a picture book . . . The golf is spectacular, the course more so, the descriptions luminous."—USA Today

Mark Frost is the author of the critically acclaimed The Greatest Game Ever Played, The Grand Slam, and the bestselling The List of 7, The 6 Messiahs, and Before I Wake. He received a Writer's Guild Award and an Emmy nomination for his work as executive story editor on the acclaimed television series Hill Street Blues, and was the co-creator and executive producer of the ABC television series Twin Peaks. He lives in Los Angeles and upstate New York.
Loading...
or
Not Currently Available for Direct Purchase