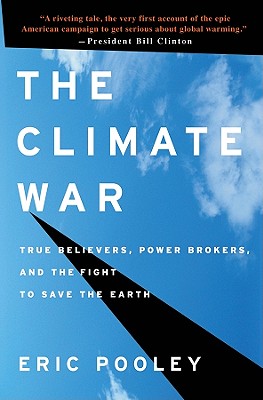 True Believers, Power Brokers, and the Fight to Save the Earth

In The Climate War, Eric Pooley--deputy editor of Bloomberg BusinessWeek--does for global warming what Bob Woodward did for presidents and Lawrence Wright did for terrorists. In this epic tale of an American civil war, Pooley takes us behind the scenes and into the hearts and minds of the most important players in the struggle to cap global warming pollution--a fight in which trillions of dollars and the fate of the planet are at stake.

Why has it been so hard for America to come to grips with climate change? Why do so many people believe it isn't really happening? As President Obama's science advisor John Holdren has said, "We're driving in a car with bad brakes in a fog and heading for a cliff. We know for sure that cliff is out there. We just don't know exactly where it is. Prudence would suggest that we should start putting on the brakes." But powerful interests are threatened by the carbon cap that would speed the transition to a clean energy economy, and their agents have worked successfully to deny the problem and delay the solutions.

To write this book, Pooley, the former managing editor of Fortune and chief political correspondent for Time, spent three years embedded with an extraordinary cast of characters: from the flamboyant head of one of the nation's largest coal-burning energy companies to the driven environmental leader who made common cause with him, from leading scientists warning of impending catastrophe to professional skeptics disputing almost every aspect of climate science, from radical activists chaining themselves to bulldozers to powerful lobbyists, media gurus, and advisors in Obama's West Wing--and, to top it off, unprecedented access to former Vice President Al Gore and his team of climate activists.

Pooley captures the quiet determination and even heroism of climate campaigners who have dedicated their lives to an uphill battle that's still raging today. He asks whether we have what it takes to preserve our planet's habitability, and shows how America's climate war sends shock waves from Bali to Copenhagen. No other reporter enjoys such access to this cast of characters. No other book covers this terrain. From the trenches of a North Carolina power plant to the battlefields of Capitol Hill, Madison Avenue, and Wall Street, The Climate War is the essential read for anyone who wants to understand the players and politics behind the most important issue we face today.

Eric Pooley is a well-known expert on climate politics. A contributor to Time, Slate, and other magazines, he has served as managing editor of Fortune, editor of Time Europe, and national editor and chief political correspondent of Time. He has written Time cover profiles of Bill Clinton, Al Gore, George W. Bush, Kenneth Starr, Rudolph Giuliani, and Rupert Murdoch, among many others. In 1996, as Time's White House correspondent, his coverage of the Clinton re-election campaign received the Gerald R. Ford Prize for Distinguished Reporting on the Presidency. He co-edited Time's National Magazine Award-winning special issue on the terrorist attacks of September 11, 2001, and he has also been a finalist for National Magazine Awards as both an editor and writer. In 2008 he was a Fellow at Harvard's Kennedy School of Government, where he studied press coverage of the climate crisis, and he has appeared as an expert commentator on Nightline, Charlie Rose, CBS Evening News, NBC Nightly News, PBS Frontline, Anderson Cooper 360, All Things Considered, and many other programs.
Loading...
or support indie stores by buying on