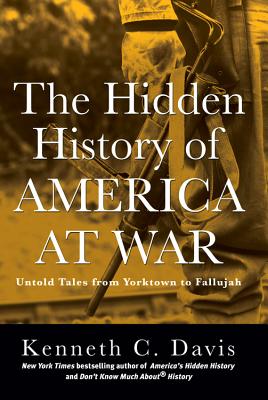 The Hidden History of America at War

Untold Tales from Yorktown to Fallujah

Multi-million-copy bestselling historian Kenneth C. Davis sets his sights on war stories in The Hidden History of America at War. In prose that will remind you of "the best teacher you ever had" (People Magazine), Davis brings to life six emblematic battles, revealing untold tales that span our nation's history, from the Revolutionary War to Iraq. Along the way, he illuminates why we go to war, who fights, the grunt's-eye view of combat, and how these conflicts reshaped our military and national identity.

From the Battle of Yorktown (1781), where a fledgling America learned hard lessons about what kind of military it would need to survive, to Fallujah (2004), which epitomized the dawn of the privatization of war, Hidden History of America at War takes readers inside the battlefield, introducing them to key characters and events that will shatter myths, misconceptions, and romanticism, replacing them with rich insight.

Praise For The Hidden History of America at War: Untold Tales from Yorktown to Fallujah…

"Ambitious...[Davis] makes history palatable and intriguing, pointing out what gets left out and drawing parallels. If that motivates readers to delve into McPherson on the Civil War, Chernow on Washington and Alexander Hamilton, and Ricks on the fiasco in Iraq, he will have achieved an important goal. History tells us where we came from, and Davis reminds us it never has to be boring."
—Miami Herald

"[Kenneth C. Davis] has carved a niche for himself as a go-to guy for historical insight and analysis.... Absorbing... [The Hidden History of America at War] should be required reading for both the public and their elected officials."—Publishers Weekly, Starred Review

"There's only one person who can top Kenneth C. Davis--and that's Kenneth C. Davis. With The Hidden History of America at War, he's composed yet another brilliant, thought-provoking, and compelling book. But along with uncovering extraordinary and yet little-known stories that readers will find absolutely captivating, Davis demonstrates why learning about these conflicts--even those from the Revolution and the Civil War--are incredibly relevant to the present day. Davis offers a hard-hitting and sometimes critical look at some of the most consequential wartime decisions made by presidents and policy makers, but his admiration and respect for the men and women who have served and sacrificed so much for this nation is unwavering."—Andrew Carroll, editor of the New York Times bestsellers War Letters and Behind the Lines

"With his trademark storytelling flair, Kenneth C. Davis illuminates six critical, but often overlooked battles that helped define America's character and its evolving response to conflict. This fascinating and strikingly insightful book is a must-read for anyone who wants to better understand our nation's bloody history of war."
—Eric Jay Dolin, author of Leviathan and When America First Met China

"A fascinating exploration of war and the myths of war. Kenneth C. Davis shows how interesting the truth can be."

"Reading him is like returning to the classroom of the best teacher you ever had."
—People Magazine

"[M]errily removes the whitewash from an oft-bland concept of the past."
—Associated Press

Kenneth C. Davis is the New York Times bestselling author of the Don't Know Much About® series with more than four million copies in print worldwide. Davis is a frequent media guest on national television and radio; he has written for the Op-Ed page of the New York Times, and been a commentator on NPR's All Things Considered. He posts regularly at DontKnowMuch.com and makes "virtual visits" to schools, libraries, and other audiences.
Loading...
or
Not Currently Available for Direct Purchase