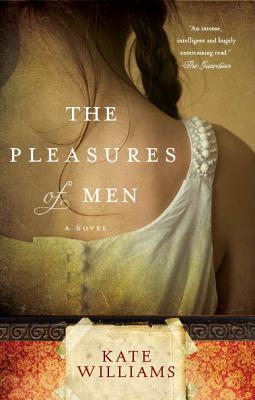 The Pleasures of Men

July 1840: The young Queen Victoria has just entered her third year on the throne when a major recession brings London's desperate and destitute into its sweltering streets. While the city crackles with tension, orphaned Catherine Sorgeiul stays locked away in her uncle's home, a peculiar place where death masks adorn the walls and certain rooms are strictly forbidden. Nineteen years old and haunted by a dark past, Catherine becomes obsessed with a series of terrible murders of young girls sweeping the city. Details of the crimes are especially gruesome--the victims' hair has been newly plaited and thrust into their mouths, and their limbs are grotesquely folded behind them, like wounded birds--and the serial killer is soon nicknamed the Man of Crows. Catherine begins writing stories about the victims--women on their own and vulnerable in the big city--and gradually the story of the murderer as well. But she soon realizes that she has involved herself in a web of betrayal, deceit, and terror that threatens her and all those around her. A remarkable fiction debut, The Pleasures of Men is a gripping and spine-tingling thriller.

Praise For The Pleasures of Men…

"A warning: Don't even think about starting Williams' tantalizingly unnerving thriller unless you've cleared your schedule for the next few hours."—More

"A charged, fast-paced ride through the dark underbelly of Victorian London in the footsteps of a serial killer. Fans of Sarah Waters will love it."—Good Housekeeping (UK)

"This is a wonderfully ripe, imaginative and gripping piece of Victorian pastiche, with a spider's web of a plot and a spine-tingling atmosphere of menace and suspense."—The London Times

"The Pleasures of Men is an intense, intelligent and hugely entertaining read."—The Guardian

"The Pleasures of Men shares with Wolf Hall an ambitious, challenging concern with form combined with a pitch-perfect historical ear. . . . This intoxicating and disturbing novel is properly thrilling and extraordinarily well-written. Kate Williams is already an accomplished biographer; The Pleasures of Men shows a soaring talent let loose."—The Independent on Sunday

"Part bodice-ripper, part-slasher, the book's elaborate plot moves along at a brisk clip with a nod to the likes of Sarah Waters and Peter Ackroyd."—The Daily Mail

"[A] promising first novel . . . Readers looking for more psychological sophistication than is usual in such historicals will be pleased."—Publishers Weekly

Kate Williams earned her BA at Somerville College, Oxford, where she was a College Scholar; she received her MA from Queen Mary, University of London, and her DPhil at Oxford. Her debut book, England's Mistress: The Infamous Life of Emma Hamilton (Ballantine, 2006), was shortlisted for the Marsh Prize for Biography and her second book, Becoming Queen (Ballantine, 2010), about the passionate youth of Queen Victoria and Princess Charlotte was a Book of the Year in the Tatler and Spectator. She is currently writing a biography of Josephine Bonaparte, Mistress of Empires, for publication in Spring 2012 by Ballantine. She teaches creative writing at London University. The Pleasures of Men is her first novel. She lives in London, England.
Loading...
or support indie stores by buying on