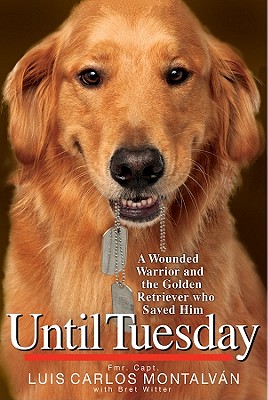 A Wounded Warrior and the Golden Retriever Who Saved Him

A heartwarming dog story like no other: Tuesday, a lovable golden retriever, changes a former soldier's life forever.

A highly decorated captain in the U.S. Army, Luis Montalván never backed down from a challenge during his two tours of duty in Iraq. After returning home from combat, however, his physical wounds and crippling post-traumatic stress disorder began to take their toll. He wondered if he would ever recover.

Then Luis met Tuesday, a sensitive golden retriever trained to assist the disabled. Tuesday had lived among prisoners and at a home for troubled boys, and he found it difficult to trust in or connect with a human being--until Luis.

Until Tuesday is the story of how two wounded warriors, who had given so much and suffered the consequences, found salvation in each other. It is a story about war and peace, injury and recovery, psychological wounds and spiritual restoration. But more than that, it is a story about the love between a man and dog, and how, together, they healed each other's souls.

Luis Carlos Montalván was a captain in the U.S. Army who served two combat tours in Iraq, where he earned the Combat Action Badge, two Bronze Stars, and the Purple Heart. He was the bestselling author of Until Tuesday: A Wounded Warrior and the Golden Retriever Who Saved Him and two children's books, Tuesday Tucks Me In and Tuesday Takes Me There. He and Tuesday advocated for veterans and others with disabilities, tirelessly promoting the virtues of service dogs. He is buried at Arlington National Cemetery.

Bret Witter is the writer behind Dewey: The Small Town Library Cat Who Touched the World, which spent months on the Times bestseller List and has sold over 1.5 million copies worldwide.
or
Not Currently Available for Direct Purchase
Copyright © 2020 American Booksellers Association