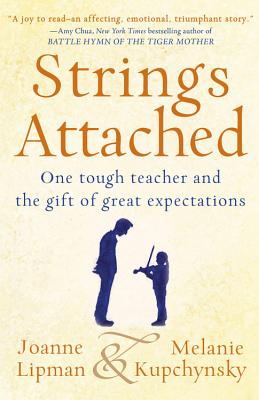 One Tough Teacher and the Gift of Great Expectations

THE FINE ART OF TOUGH LOVE.

If you're lucky, somewhere in your past is that one person who changed your life forever. The one who pushed you to dream bigger and to reach higher, and who set you straight on what matters in life. Perhaps it was a coach, or a professor, or a family friend.

For Joanne Lipman and Melanie Kupchynsky, that person was a public-school music teacher, Jerry Kupchynsky, known as Mr. K--a Ukrainian-born taskmaster who yelled and stomped and screamed, and who drove his students harder than anyone had ever driven them before. Through sheer force of will, he made them better than they had any right to be.

Strings Attached tells the inspiring, poignant, and powerful story of this remarkable man, whose life seemed to conspire against him at every turn and yet who was able to transform his own heartache into triumph for his students.

Lyrically recounted by two former students -- acclaimed journalist Joanne Lipman and Mr. K's daughter, Chicago Symphony Orchestra violinist Melanie Kupchynsky -- Strings Attached takes you on a journey that spans from his days as a forced Nazi laborer and his later home life as a husband to an invalid wife, to his heart-breaking search for his missing daughter, Melanie's sister.

This is an unforgettable tale -- a captivating narrative that is as absorbing as fiction -- about the power of a great teacher, but also about the legacy that remains long after the last note has faded into silence: lessons in resilience, excellence, and tough love.

Strings Attached is for anyone indebted to a mentor and for those devoted to igniting excellence in others.

Praise For Strings Attached: One Tough Teacher and the Gift of Great Expectations…

"Moving and motivating.... While tactics like [Mr. K's] may not have earned his students' immediate devotion, they never forgot him and often found the could achieve more than they ever dreamed.... A Must Read."—Kirkus Reviews, Starred Review

"A very fine dual memoir....
For those who had a figure like Mr. K in their lives, STRINGS ATTACHED will resonate. Everyone else will wish they had been so lucky."

Joanne Lipman is one of the nation's most prominent journalists and commentators. She founded and was Editor-in-Chief of the National Magazine Award-winning Condé Nast Portfolio, and was deputy managing editor of the Wall Street Journal, where she supervised coverage that earned three Pulitzer Prizes. She advises news and media organizations such as CNN, Yahoo!, and New York Public Radio, and she has appeared as a commentator on CNN, CBS, and NBC among others. Her work has also appeared in publications including the New York Times and Newsweek. She and her family live in New York City.

Melanie Kupchynsky has been a violinist with the Chicago Symphony Orchestra for more than twenty years, during which time the symphony has won twenty-one Grammys. She began studying violin at the age of four with her father, Jerry "Mr. K" Kupchynsky. Melanie began her career with the Boston Pops Esplanade Orchestra under the direction of John Williams. With the Chicago Symphony Orchestra she has performed around the globe under the world's greatest conductors and with the world's most prominent soloists. She is also an active chamber musician, and she is a participant in the CSO's Citizen Musician community outreach program. She and her family live near Chicago.
Loading...
or
Not Currently Available for Direct Purchase