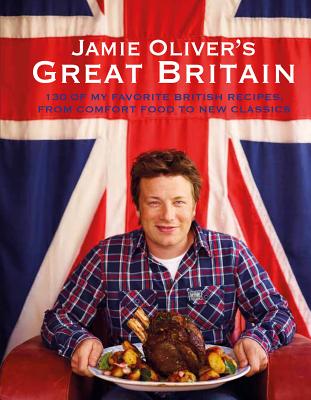 Having grown up in his parents' gastropub, Jamie Oliver has always had a special place in his heart for British cooking. And in recent years there's been an exciting revolution in the British food world in general. English chefs, producers, and artisans are retracing old recipes, rediscovering quality ingredients, and focusing on simplicity and quality. Jamie celebrates the best of the old and new (including classic British immigrant food) in his first cookbook focused on England. Here are over 130 great, easy-to-prepare recipes, ranging from salads-Heavenly Salmon and Epic Roast Chicken; to puddings-Rhubarb and Rice Pudding and Citrus Cheesecake Pots; to Sunday lunch-Guinness Lamb Shanks and Roast Quail Skewers; and, of course, the crumbliest scones. America has already fallen for the new British gastropub cooking, with popular restaurants by chefs such as April Bloomfield of The Spotted Pig and the John Dory. Now Jamie shows how to make the same delicious food at home. This is definitely not your grandmother's mushy peas!

Jamie Oliver grew up in his parents' country pub, the Cricketers in Clavering, where he started cooking at the age of eight, before studying at London's Westminster Catering College. He then went on to work with some of the top chefs in England--namely Antonio Carluccio at the Neal Street Restaurant and Rose Gray and Ruth Rogers at the River Cafe. The author of such popular titles as The Naked Chef, Jamie's Kitchen, and Jamie's Italy, among others, he has written for the Saturday Times, served as Food Editor at GQ and Marie Claire magazines, and hosted the popular television show The Naked Chef. Oliver's recent television show, Food Revolution, has aired on ABC for two seasons. He is thirty-seven and lives in London with his wife Jools and their children, Poppy, Daisy, Petal, and Buddy Bear.
or
Not Currently Available for Direct Purchase
Copyright © 2020 American Booksellers Association