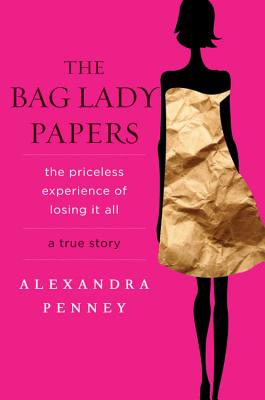 The Priceless Experience of Losing It All

In December 2008, my worst nightmare came true . . . How do you pick yourself up after the one thing you most feared happens to you? Alexandra Penney's revealing, spirited, and ultimately redemptive true story shows us how. Throughout her life, Alexandra Penney's worst fear was of becoming a bag lady. Even as she worked several jobs while raising a son as a single mother, wrote a bestselling advice book, and became editor in chief of Self magazine, she was haunted by the image of herself alone, bankrupt, and living on the street. She even went to therapy in an attempt to alleviate the worry that all she had worked for could crumble. And then, one day, that's exactly what happened. Penney had taken a friend's advice and invested nearly everything she had ever earned--all of her savings--with Bernie Madoff. One day she was successful and wealthy; the next she had almost nothing. Suddenly, at an age when many Americans retire, Penney saw her worst nightmares coming true. Based on her popular blog posts on The Daily Beast, this memoir chronicles Penney's struggle to cope with the devastating financial and emotional fallout of being cheated out of her life savings and illuminates her journey back to sanity, solvency, and security. "I will work harder than I ever have before--which was pretty hard indeed--and see what happens. I have the feeling something good will come of it: tough, challenging work and laserlike focus have always paid off for me. . . . Was it better to have it and then lose it? Yes, yes, yes! Even though I lived with horrible bag lady fears of losing it all, now that those financial fears have materialized, I'm in pretty good shape and looking to what's next. Experiences--good and bad, exciting and boring, tragic and absurd--make up a life. Not to have lived to the fullest is the saddest, most irresponsible life I can think of."
--- from The Bag Lady Papers

Alexandra Penney is an artist, best-selling author, and former editor-in-chief of Self magazine. She had a one-person show at Galerie in Berlin and her work was shown at Miami's Art Basel. She lives in New York.