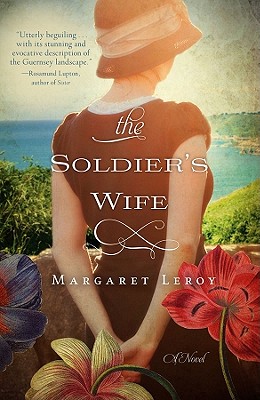 “Open this book and you'll be transported to the island of Guernsey during World War II where you'll meet Vivienne de la Mare, a true heroine. Leroy paints the setting beautifully. You will see the abundant gardens already going to seed because they've been abandoned by those who left the island before the Germans came. You will feel the weight of the German occupation as the soldiers move in, take most of the food, and ever so politely terrify the people. As Vivienne takes great risks to care for her children and her mentally frail mother-in-law, she falls into a forbidden love affair. Warning: Once you start The Soldier's Wife, you'll be hooked.”
— Elaine Petrocelli, Book Passage, Corte Madera, CA
View the List

A novel full of grand passion and intensity, The Soldier's Wife asks "What would you do for your family?", "What should you do for a stranger?", and "What would you do for love?" As World War II draws closer and closer to Guernsey, Vivienne de la Mare knows that there will be sacrifices to be made. Not just for herself, but for her two young daughters and for her mother-in-law, for whom she cares while her husband is away fighting. What she does not expect is that she will fall in love with one of the enigmatic German soldiers who take up residence in the house next door to her home. As their relationship intensifies, so do the pressures on Vivienne. Food and resources grow scant, and the restrictions placed upon the residents of the island grow with each passing week. Though Vivienne knows the perils of her love affair with Gunther, she believes that she can keep their relationship--and her family--safe. But when she becomes aware of the full brutality of the Occupation, she must decide if she is willing to risk her personal happiness for the life of a stranger. Includes a reading group guide for book clubs.

Praise For The Soldier's Wife…

"With its stunning and evocative description of the Guernsey landscape, its subtle and astute depiction of a woman's relationship with her children, her lover, and her husband, this absorbing novel is utterly beguiling."—Rosamund Lupton, author of Sister

Margaret Leroy studied music at Oxford and has been a music therapist, play leader, shop assistant, and social worker. For fifteen years she has worked as a social worker and counselor, specializing in marital therapy and child protection. Her books have been published in nine languages, and her first novel, Trust, has been translated into five languages and was broadcast in February 2003 as a Granada TV drama.

The book opens with Vivienne reading fairy tales to her younger daughter, Millie. Discuss the ways in which The Soldier’s Wife is like a fairy tale, as well as the important ways in which it is not. Discuss, too, the running motif of fairy tales throughout the book, including what Vivienne reads to Millie out of Angie’s book of Guernsey stories. Is Leroy using the fairy tales as symbols, or metaphors, or as a way of constructing a thematic statement for the book? (Or, perhaps, all three?)

Consider the ways the setting of The Soldier’s Wife is used as a literary device. Discuss scenes where the landscape foreshadows events or parallels the moods of the characters (in particular, Vivienne).

How effectively do you think Leroy portrayed life on the island of Guernsey during its occupation by the Germans in World War II? In particular, discuss the extent to which she depicted the bombing of the harbor, the gradual decline into poverty and resourcefulness of the island’s inhabitants, and the strained and complex relationships between the German soldiers and the British citizens.

Because most of the British men from Guernsey were enlisted as soldiers in the war, a majority of the characters in this book are women. Discuss the ways in which the author writes about women during wartime, focusing in particular on Angie, Gwen, Blanche, Vivienne, and Evelyn.

Similarly, consider—by way of the book’s characters—how the different generations were affected by the war: Millie and Simon’s innocent youth, Blanche and Johnnie’s emerging adulthood, Vivienne and Gunther’s duty-torn middle age, and Evelyn’s advanced (and afflicted) years. In what ways did each generation suffer because of the war, and in what ways were they changed, perhaps, for the better?

Comment on Vivienne’s honest appraisal of her marriage early in the novel, before her relationship with Gunther begins. What does it say about her that she never confronted Eugene about his mistress? Do you think that she would have returned to her marriage after the war with the same practical resignation?

Some of the less developed characters in the novel are interesting nonetheless. Discuss the roles Gwen, Angie, Max, and Johnnie play in the book and in Vivienne’s life. How does each character teach her something, or reveal something, about which she would otherwise remain in the dark? How do her relationships with these characters change, and change her, over the course of the story?

Discuss Kirill and his role in the novel, too. When Millie began speaking about the “white ghost” in the barn, did you suspect she was talking about a man from the work camp? What did you think had happened to him the first time he disappeared? In what ways was he responsible for a change in Vivienne, particularly as a character in opposition to Gunther, a man who was also responsible for significant change in Vivienne?

When Vivienne broke off her relationship with Gunther, what did you believe? Did you believe that Gunther had reported Vivienne for housing Kirill? What did you think of Max’s revelation to Vivienne that Hermann had died, and then, at the end of the book, that Gunther had not been responsible for Kirill’s death? Do you think Vivienne blamed Gunther for Kirill’s death before this, or did it matter to her? How much did Vivienne hold Gunther responsible for his actions as a German soldier?

Gunther and Vivienne were both marked by the death of a parent—Vivienne, her mother, and Gunther, his father. What other similarities, particularly of character, did they share? What made them such an ideal match? Had the war ended while Gunther was still on Guernsey, what might have happened to them? Would their fairy tale have had a happy ending?

In what ways is Vivienne a memorable heroine? What character trait did you find most interesting about her? What made you like her (or, possibly, dislike her) in particular?

Compare this book to other works of historical fiction that you have read. What are its biggest strengths? What makes it different from other historical novels? Did it change, in any way, your perspective of life in Europe during World War II? What can be learned from these characters and their particular situation that can be useful in contemporary society, even in the United States?