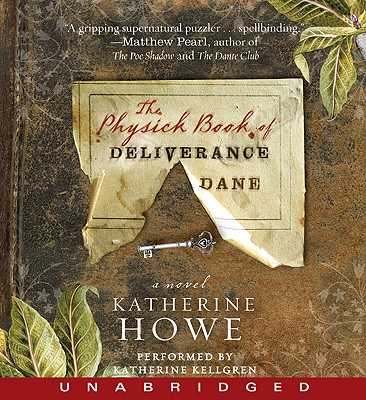 "A fresh present-day story infused with an original take on popular history. Forget broomsticks and pointy hats; here are witches that could well be walking among us today. This debut novel flows with poetic charm and eloquence that achieves high literary merit while concocting a gripping supernatural puzzler. Katherine Howe's talent is spellbinding."
--Matthew Pearl, author of The Poe Shadow and The Dante Club

A spellbinding, beautifully written novel that moves between contemporary times and one of the most fascinating and disturbing periods in American history-the Salem witch trials.

Harvard graduate student Connie Goodwin needs to spend her summer doing research for her doctoral dissertation. But when her mother asks her to handle the sale of Connie's grandmother's abandoned home near Salem, she can't refuse. As she is drawn deeper into the mysteries of the family house, Connie discovers an ancient key within a seventeenth-century Bible. The key contains a yellowing fragment of parchment with a name written upon it: Deliverance Dane. This discovery launches Connie on a quest--to find out who this woman was and to unearth a rare artifact of singular power: a physick book, its pages a secret repository for lost knowledge.

As the pieces of Deliverance's harrowing story begin to fall into place, Connie is haunted by visions of the long-ago witch trials, and she begins to fear that she is more tied to Salem's dark past then she could have ever imagined.

Written with astonishing conviction and grace, The Physick Book of Deliverance Dane travels seamlessly between the witch trials of the 1690s and a modern woman's story of mystery, intrigue, and revelation.

Katherine Howe's ancestors settled Essex County, Mass. in the 1620s, and stayed there through the twentieth century. Family members included Elizabeth Proctor, who survived the Salem witch trials, and Elizabeth Howe, who did not. Katherine Howe got a Ph.D. in American and New England Studies at Boston University, which included a research seminar on New England witchcraft. The idea for thisnovel developed while she was studying for her Ph.D. exams, walking her dog through the woods between Marblehead and Salem. She lives in Marblehead, MA with her husband and assorted animals.
or
Not Currently Available for Direct Purchase
Copyright © 2020 American Booksellers Association