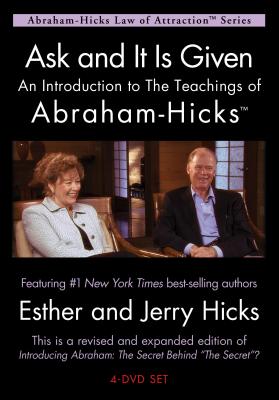 Ask And It Is Given

An Introduction to The Teachings of Abraham-Hicks

In this unprecedented sit-down interview, Esther and Jerry Hicks relate their incredible story and introduce the Non-Physical group consciousness Abraham. Abraham explains the basics of the teachings, and answers a myriad of questions about every facet of living. Also included is a bonus segment from an Abraham-Hicks seminar cruise in which Abraham reveals the secret behind the best-selling video and book The Secret, which was originally based on Abraham’s teachings, but from which Abraham was ultimately deleted. Finally, join Esther, Jerry, Abraham, and hundreds of attendees at a 2010 Art of Allowing workshop in San Francisco, where Abraham explains the powerful Vortex of Creation concept in detail and then answers questions from several guests seeking more clarity. Episode 1: An Introduction to The Teachings of Abraham-Hicks™Episode 2: A Further Awareness of the Philosophy of AbrahamEpisode 3: Jerry and Esther’s Continuing Joyous ExpansionEpisode 4: Abraham’s Live Vortex of Attraction Seminar

#1 New York Times best-selling authors Esther and Jerry Hicks produce the Leading Edge Abraham-Hicks teachings on the Art of Allowing our natural Well-Being to come forth. Law of Attraction workshops held in up to 60 cities per year inspire a regular flow of Abraham books, CDs, and DVDs.Their internationally acclaimed website is: www.abraham-hicks.com.
Loading...
or
Not Currently Available for Direct Purchase