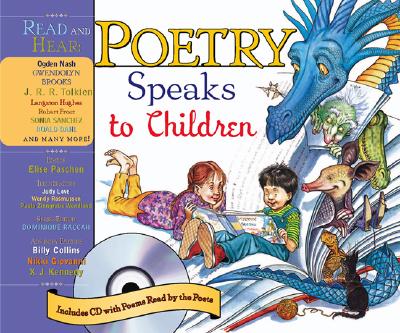 In the tradition of Poetry Speaks, the anthology named a Best Book of 2002 by School Library Journal, and praised by the Seattle Post-Intelligencer as "a volume to delight longtime lovers of poetry and to spark new love for poetry, especially among the young," Sourcebooks MediaFusion is proud to introduce the joy of the written and spoken word in Poetry Speaks to Children. Parents, educators, librarians, and poetry enthusiasts have wondered for years how to get children really interested in poetry. Until now, there hasn't been a collection of poems and poets that spoke directly to that elusive audience. Poetry Speaks to Children cracks through that barrier by packaging the best poems by the best authors along with a CD-making the engrossing and often mischievous verses come alive in the voices of many of the creators. Poetry Speaks to Children reaches into the world of poetry and pulls out the elements children love: rhyme, rhythm, fun and, every once in a while, a little mischief. More than 90 poems, for children ages six and up, celebrate the written word and feature a star-studded lineup of beloved poets, including: Roald Dahl; J. R. R. Tolkien; Robert Frost; Gwendolyn Brooks; Ogden Nash; John Ciardi; Langston Hughes; Sonia Sanchez; Seamus Heaney; Canada's best-loved children's poet, Dennis Lee; Rita Dove; Billy Collins; Nikki Giovanni and X. J. Kennedy. On the accompanying CD, 50 of the poems are brought to life--most read by the poets themselves--allow the reader to hear the words as the poets intended. Hear Gwendolyn Brooks growl her rhyming verse poem "The Tiger Who Wore White Gloves, or, What You Are You Are" with verve and inflection-relaying the story of the striped cat who "rushed to the jungle fair for something fine to wear," much to the hoots of his jungle peers. Amid jeers, sneers and sighs, the tiger eventually learns to be comfortable in his own striped skin (or fur as it were ). Follow Ogden Nash as he tells of the brave little Isabel, who "didn't worry, didn't scream or scurry" when confronted with a ravenous bear, a one-eyed giant or a troublesome doctor. Her clever solutions to problems ("She turned the witch into milk and drank her") will keep even the most reluctant readers interested. Listen to James Berry, who quells a little girl's anxieties about her color by celebrating the marriage of "night and light," emphasizing how all colors are necessary in nature, in "Okay, Brown Girl, Okay." Turn the page and tune in . . . kids won't be the only ones hooked

EditorElise Paschen is the author of Infidelities, winner of the Nicholas Roerich Poetry Prize, and Houses: Coasts, and her poems have appeared in numerous magazines and anthologies. A graduate of Harvard University, she holds M.Phil. and D.Phil. degrees in twentieth century literature from Oxford University. Former Executive Director of the Poetry Society of America (1988-2001) and co-founder of "Poetry in Motion," a nationwide program that places poetry in subways and buses, she is the co-editor of Poetry Speaks, Poetry in Motion, and Poetry in Motion from Coast to Coast. Dr. Paschen teaches in the Writing Program at The School of the Art Institute of Chicago, and she lives in Chicago with her husband and two children. Series EditorDominique Raccah is founder, president, and publisher of Sourcebooks, a leading independent publisher outside of Chicago. Today Sourcebooks publishes nonfiction, fiction, and poetry. She is the series editor of Poetry Speaks and the Sourcebooks Shakespeare. Advisory EditorsBilly Collins is the author of many volumes of poetry including The Trouble with Poetry and Other Poems, Nine Horses, Sailing Alone Around the Room, and Picnic, Lightning. His poems have appeared regularly in The Best American Poetry. He is a Distinguished Professor of English at Lehman College (City University of New York). He served as United States Poet Laureate (2001-03) and is currently the poet laureate of New York State. A poet, lecturer, and educator, Nikki Giovanni has written more than two dozen books, including Quilting the Black-Eyed Pea, Racism 101, Blues For All the Changes, and Love Poems. The Nikki Giovanni Poetry Collection, a spoken-word CD, was a finalist for a Grammy Award in 2003. She is a three-time winner of the NAACP Image Award for Literature; she has also received the Langston Hughes award for Distinguished Contributions to Arts and Letters and The Rosa Parks Woman of Courage Award. She has been voted Woman of the Year by Essence, Mademoiselle, and Ladies' Home Journal. She is a University Distinguished Professor at Virginia Tech, where she teaches writing and literature. X. J. Kennedy is the author of Nude Descending a Staircase (winner of the Lamont Award of the Academy of American Poets) and The Lords of Misrule, which won the Poets' Prize, and other poetry books, as well as numerous works for children. With his wife, Dorothy, he edited Knock at a Star: A Child's Introduction to Poetry. Among his many awards is the National Council of Teachers of English Year 2000 Award for Excellence in Children's Poetry. Formerly the poetry editor of The Paris Review, Kennedy has taught at the University of Michigan, the Woman's College of the University of North Carolina, Wellesley College, the University of California-Irvine, the University of Leeds, and Tufts. Mr. Kennedy lives in Lexington, Massachusetts, with his wife. IllustratorsJudy Love says: "I currently live in a turn of the century house in Belmont, MA, with two cats, Fluffy and Jeremy, a parakeet called Tweed and a half dozen unnamed fish. I am very lucky to have two wonderful sons, Matt (21) and Tom (17), who are both accomplished artists. We enjoy going to museums and art shows together and whenever I need advice about one of my illustrations I can ask for their help. My life is full of art, music, theater, and friends. I can usually be found in my studio, perched on a high stool, drinking a huge mug of tea, listening to a book on tape and madly sketching while I try to keep Fluffy from walking all over my drawing I've wanted to be an illustrator for as long as I can remember. Luckily I had parents that thought that this was a great idea, too. When I was eight years old my mother gave me a book of poetry with space around each verse to add a picture. Here I am almost fifty years later doing the same thing!" Wendy Rasmussen has been drawing since the first time she could hold a crayon. She had a very creative father who told her stories and encouraged her to draw and inspired tales of trolls and other folklore. In fourth grade she wrote an essay called "Why I Want to Be an Illustrator When I Grow Up." An eye for detail comes from her love of science (she has a degree in Biology and a minor in Art) and her imaginative animals come from her father's fables. She lives in a remote area in Bucks County, Pennsylvania, where she is surrounded by wildlife that is a constant inspiration for her work. Her companions are two black labs and a cat, all of whom have served as models, whether they know it or not! Paula Zinngrabe Wendland comes from a long line of artists; both of her parents are artists and her sister is a sculptor. She enjoys illustrating folk tales the most because her intense colors and stylized figures fit well with the imaginative tales. Her hobbies include figure skating, ceramics, designing crafts, and gardening. She has a redheaded husband, a daughter named Clara who is 12 years old and writes poetry, and a son, Nathan, age 9, who is a Jedi-wannabe and knows more about dinosaurs than anyone else Paula knows. She has a grumpy black cat named Schwartz.
Loading...
or support indie stores by buying on