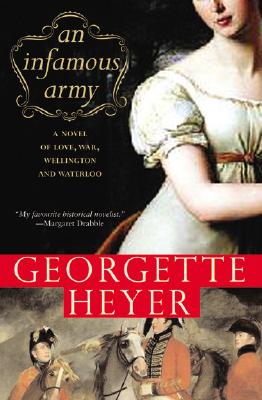 A Novel of Wellington, Waterloo, Love and War (Historical Romances #9)

On the eve of battle, passions are running high...

IN THE SUMMER OF 1815, with Napolean Bonaparte marching down from the north, Brussels is a whirlwind of parties, balls and soirees. In the swirling social scene surrounding the Duke of Wellington and his noble aides de camp, no one attracts more attention than the beautiful, outrageous young widow Lady Barbara Childe. On their first meeting, dashing Colonel Charles Audley proposes to her, but even their betrothal doesn't calm her wild behavior. Finally, with the Battle of Waterloo raging just miles away, civilians fleeing and the wounded pouring back into the town, Lady Barbara discovers where her heart really lies, and like a true noblewoman, she rises to the occasion, and to the demands of love, life and war... "Wonderful characters, elegant, witty writing, perfect period detail, and rapturously romantic. Georgette Heyer
achieves what the rest of us only aspire to."--Katie Fforde

The late Georgette Heyer was a very private woman. Her historical novels have charmed and delighted millions of readers for decades, though she rarely reached out to the public to discuss her works or private life. It is known that she was born in Wimbledon in August 1902, and her first novel, The Black Moth, was published in 1921. Heyer published 56 books over the next 53 years, until her death from lung cancer in 1974. Heyer's large volume of works included Regency romances, mysteries and historical fiction. Known also as the Queen of Regency romance, Heyer was legendary for her research, historical accuracy and her extraordinary plots and characterizations. Her last book, My Lord John, was published posthumously in 1975. She was married to George Ronald Rougier, a mining engineer, and they had one son together, Richard.
or support indie stores by buying on
Copyright © 2020 American Booksellers Association