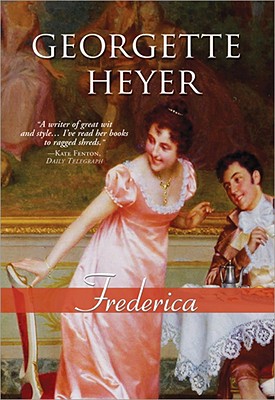 Determined to secure a brilliant marriage for her beautiful sister, Frederica seeks out their distant cousin the Marquis of Alverstoke. Lovely, competent, and refreshingly straightforward, Frederica makes such a strong impression on him that to his own amazement, the Marquis agrees to help launch them all into society.

Normally Lord Alverstoke keeps his distance from his family, which includes two overbearing sisters and innumerable favor-seekers. But with his enterprising -- and altogether entertaining--country cousins chasing wishes and getting into one scrape after another right on his doorstep, before he knows it the Marquis finds himself dangerously embroiled.

The late Georgette Heyer was a very private woman. Her historical novels have charmed and delighted millions of readers for decades, though she rarely reached out to the public to discuss her works or private life. It is known that she was born in Wimbledon in August 1902, and her first novel, The Black Moth, was published in 1921. Heyer published 56 books over the next 53 years, until her death from lung cancer in 1974. Heyer's large volume of works included Regency romances, mysteries and historical fiction. Known also as the Queen of Regency romance, Heyer was legendary for her research, historical accuracy and her extraordinary plots and characterizations. Her last book, My Lord John, was published posthumously in 1975. She was married to George Ronald Rougier, a mining engineer, and they had one son together, Richard.
Loading...
or
Not Currently Available for Direct Purchase