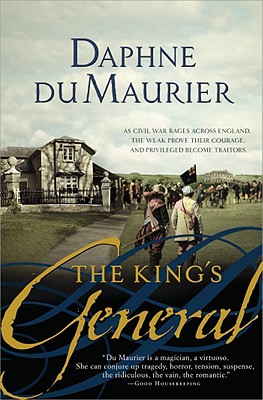 As civil war rages across England, the weak prove their courage and the privileged become traitors

In this sweeping, bittersweet saga, spellbinding author Daphne du Maurier recreates a most memorable and true love story. Honor Harris was glorious and vivacious. Sir Richard Grenville was a dashing colonel and a knight. They meet on the evening of her eighteenth birthday at the Duke of Buckingham's great ball and fall deeply in love.

Soon afterward tragedy strikes and they are separated by betrayal and war. Decades later, an undaunted Sir Richard, now a general serving King Charles I, finds her. Finally they can share their passion in the ruins of a great estate on the storm-tossed Cornish coast--one last time before being torn apart, never to embrace again.

Daphne du Maurier's 1938 novel Rebecca made her one of the most successful writers of her time. Alfred Hitchcock's adaptation of the book won the Best Picture Oscar in 1940. He later used her material for The Birds. In 1969, du Maurier was created a Dame of the British Empire.
Loading...
or support indie stores by buying on