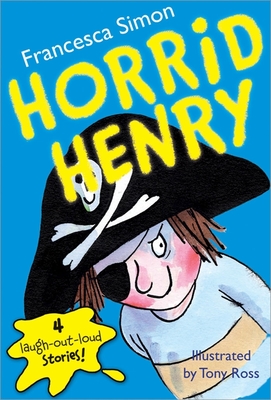 Horrid Henry is a publishing and media phenomenon all over the world. This laugh-out-loud series has sold millions of copies in the UK and over 200,000 in the US, has spawned a very successful TV show in Britain, has been published in 27 languages, and has received incredible praise from the press, librarians, booksellers, parents, and, most importantly, kids, the world over

For kids beginning to read independently, Horrid Henry by Francesca Simon and Tony Ross arrived from England this year, importing sophisticated humor and a sly approach to storytelling.--Los Angeles Times

Will make you laugh out loud.--Sunday Times

Kids love it
I love the Horrid Henry books by Francesca Simon. They have lots of funny bits in. And Henry always gets into trouble
Mia, age 6, BBC Learning is Fun

It's easy to see why Horrid Henry is the bestselling character for 5-8 year olds.
Liverpool Echo

Because it's funny
My two boys love this book and I have actually had tears running down my face and had to stop reading because of laughing so hard. My oldest son is rereading all the books in this series on his own now and he still loves them. Happy reading
T. Franklin, Parent

Kids get to be harmlessly rebellious
Henry is a beguiling hero who has entranced millions of reluctant readers... little rebels will love this collection and even little angels will be secretly thrilled by Henry's anti-heroic behaviour.
Herald

Henry's naughtiness is a yardstick against which children can get a sense of their own moral goodness and social justice
What is brilliant about the books is that Henry never does anything that is subversive. She creates an aura of supreme naughtiness (of which children are in awe) but points out that he operates within a safe and secure world.
Emily Turner, Angels And Urchins Magazine

Reaches the most important age group--children who are learning to read
I have tried out the Horrid Henry books with groups of children as a parent, as a babysitter, and as a teacher. Children love to either hear them read aloud or to read them themselves. The books are spot on for the 5-8 age range and are fun for the adults who share them too.
Danielle Hall, Teacher

The structure provides new readers with a real sense of accomplishment
My son is 7 years old and a big Horrid Henry fan. This book lived up to his expectations Horrid Henry is like most boys: he always has a plan and is always getting into mischief It was amusing, and he could not put it down. Can't wait for the next. He read it cover to cover by himself in 2 days That for me sells a book He can't wait for the next one to be published. He has recommended it to all his friends.
Mrs. Tami Gold, Parent

Reaches both boys and girls equally
Wonderfully appealing to girls and boys alike, a precious rarity at this age.
Judith Woods, Times Books

Francesca Simon was born in the United States and attended both Yale and Oxford universities. For ten years she worked as a freelance journalist. She now writes fulltime and has had many books published including the bestselling Horrid Henry series and several picture books. She lives in North London, England, with her husband, Martin, and her son, Josh. Tony Ross is a prolific illustrator of books for children, including Francesca Simon's Horrid Henry series, Martyn Beardsley's Sir Gadabout stories - as well, of course, as his own stories. Over the past few years, Tony has become one of the best known creators of original and traditional picture books and his work has been sold all over the world. Tony Ross was born on August 10, 1938, in London. He trained at the Liverpool School of Art and has worked as a cartoonist, a graphic designer, as the Art Director of an advertising agency, filmmaker, and as Senior Lecturer in Art at Manchester Polytechnic.
Loading...
or support indie stores by buying on