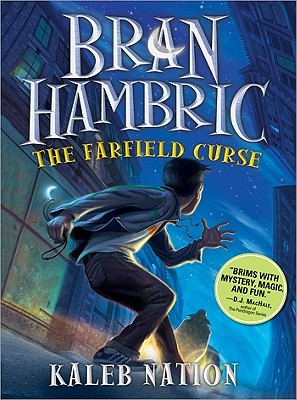 The Farfield Curse brims with mystery, magic, and fun. Kaleb Nation's wry sense of humor kept me smiling, even while the mystical sparks flew.
Get ready for lots of surprises and watch out for gnomes

In a bustling metropolis where magic is outlawed, a six-year-old child is found inside a locked bank vault. A scrap of paper reveals his name: Bran Hambric. The child remembers nothing of his life before the vault. Only magic could have done this. But why would any mage risk breaking the law to place a child in a bank vault?

Eight years later the City of Dunce has forgotten about Bran. Even his foster parents don't seem to know he exists. But there are those who have been watching, biding their time, waiting to strike, people who know where Bran came from and why he was sent away. And they will do anything to get Bran back, dead or alive...

Welcome to a world unlike any other where the adventure of a lifetime is just beginning.

Getting to know Kaleb Nation:

Sourcebooks: How did the idea for the story of Bran Hambric first come to you?
Kaleb Nation: I was fourteen and lying in bed, staring at the ceiling and thinking of an entirely different story I was working on (I was homeschooled and my mom gave me lots of creative writing assignments). Suddenly, out of nowhere, I imagined a boy and a banker waiting on a rooftop for a burglar. For some reason, the image struck me, so that I almost immediately knew the background: this boy had been left behind years before, the burglar was coming for him, and the city outlawed magic. I also knew that it was a fantasy world but in a modern setting.
I immediately got up and wrote down a few pages of notes so I wouldn't forget, and also wrote in my journal in the dark that I'd finally had "the idea." The date was 3/3/03. The time was 9:55 p.m.

SB: You're currently a college student, living in Dallas, Texas. Where are you from?
KN: I was born and lived in Round Rock, Texas, until 2003. I started writing the book here, and can remember the house and location perfectly. The surroundings were influential to certain locations in the book. Also, the Round Rock Public Library was a huge influence. In 2003, we moved to Bastrop, Texas, where I finished the novel and signed with my agent and publisher.

SB: Besides being a college student and first-time author, what are your other hobbies?
KN: I blog regularly at KalebNation.com, and I run TwilightGuy.com, a site revolving around the Twilight book series, which receives about 10,000 hits per day.

I also have my own YouTube channel (youtube.com/kalebnation) where I create video blogs and content for about 22,000 subscribers. I also enjoy making music with my computer, mainly instrumental and soundtrack scores. I have composed a soundtrack for the novel (you can hear many of the tracks at http: //www.kalebnation.com/music). This has received a lot of attention, with over 20,000 plays on YouTube. I have plans to offer the soundtrack for free download to promote the novel.

SB: When people ask you what Bran Hambric: The Farfield Curse is about, what do you tell them?
KN: Bran Hambric was found locked in a bank vault at six years old, with no memory of his past. For years, he has lived with one of the bankers, wondering why he was left behind--until one night, when he is fourteen, he is suddenly confronted by a maddened creature, speaking of Bran's true past and trying to kidnap him. Bran finds that he is at the center of a plot that started years before he was even born: the plot of a deadly curse his mother created...and one that her former masters are hunting for him to complete. Haunted by the spirit of his mother's master and living in a city where magic is illegal, Bran must undo the crimes of his past, before it is too late.

SB: How long did it take you to write Bran Hambric?
KN: The first novel took most of my teenage years to complete--about six years.

SB: Did the book entail any unusual writing habits or places?
KN: I originally wrote almost five hundred pages of the book in six to nine months, which is the fastest I've ever done, just to get it all out. Then, I spent the next four years completely rewriting the book multiple times until I was able to bring the story out correctly. This turned into two boxes and two drawers full of papers, forming The Farfield Curse and notes for five sequels. Many of the street names in the book came from a graveyard we passed when I was fifteen (I quickly wrote down as many names as I could from the car).

In the beginning, I would write chapters of the book on my tiny monochrome Palm Pilot while taking care of my baby brother during naps. Palm Pilot typing, I will note, is very, very slow. I once had an idea in the grocery store (I can remember specifically which store) where I had no paper, and had to outline the scene on a spare grocery bag. I still have the bag, and the scene is still in the book.

SB: In discussing your book with friends, what have they found most intriguing?
KN: The biggest grab I've found is the "magic crime" aspect, which I don't feel has been explored much in other books. The idea that Bran's parents were criminals, and even more so of magic, seems to grip interest. People also seem to enjoy that it is in another world yet very similar in ways to our own.

SB: Are there any lessons to be learned from your book?
KN: I think my book tells the power of choice: Bran's mother chose to sacrifice any good within her for great power. Bran, however, chooses a different path, despite being predisposed to it by his own mother. A theme of "choice" and how our choices affect others runs throughout many parts of the book.

SB: How do you think your story might influence other kids who like to write and/or want to write a book?
KN: My dream as a young teenager was to become published. Through these years, I idolized other authors, watching every documentary or video of a book signing I could find on YouTube. Somehow, after years of writing and rewriting, everything worked out in the end. I have received countless letters from teens and even adults saying my journey has influenced them to start writing, which is really the biggest payoff of everything. Even though the journey started off rough in the beginning, with a lot of effort, it all worked out in the end, and I'm finally getting to live my dream. I think my story can help other kids realize that their dream of becoming a writer can come true, if they're willing to work hard for it.