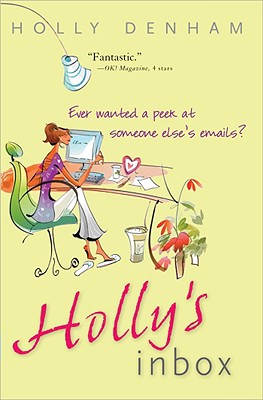 Are you sure you know what you're getting into...?

Meet Holly Denham. It's her first day as a receptionist at a London investment bank and inexperienced Holly is struggling. Take a peek at her email and you'll see why: Holly's inbox is a daily source of drama. An affair with a sexy VP heats things up at the office, but when Holly's first flame (who, she thinks, left her in the lurch) gets a job at the same company, complications abound.

How's a working girl supposed to have a love life with a demanding job, crazy friends, a dysfunctional family, and gossipy colleagues? Not to mention that Holly's been keeping a secret from everyone - and the past is about to catch up with her.

Written entirely in emails, this compulsively readable UK smash hit will keep you laughing and turning the pages all the way to its surprising and deeply satisfying ending.

Repeatedly compared to Bridget Jones' Diary, hollysinbox.com became a website phenomenon, with thousands of daily visitors from all over the world. This novel tells Holly's story in full, and also includes exclusive extra material not available on the site.

"I didn't get any sleep last night because I just HAD to finish it "
forums.handbag.com

"Are you ready for the Bridget Jones' Diary of the digital age?"
Trashionista.com

"Be warned... once you start reading, it's addictive."
Shiny Fashion

"Bound to be a huge success."
Guardian Unlimited

Holly Denham is the pen name for Bill Surie the owner of a placement service for receptionists and secretaries in London. He started the Holly's Inbox website as a place to serialize his first novel. The website became an overnight sensation and his second novel is now in the works.
or
Not Currently Available for Direct Purchase
Copyright © 2020 American Booksellers Association