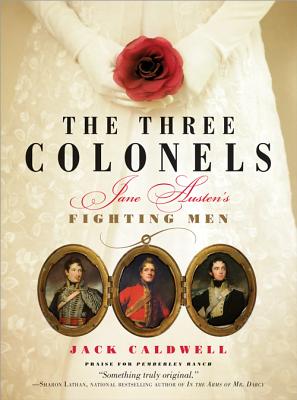 "A heart-pounding romance...Pemberley Ranch is both fresh and a great history primer."-Publishers Weekly

THE WORLD OF PRIDE & PREJUDICE AND SENSE & SENSIBILITY MERGE IN THIS ONE-OF-A-KIND CONTINUATION OF BOTH BELOVED JANE AUSTEN TALES.

As the colonels set out to meet their destinies on the fields of Waterloo, Anne, Caroline, and Marianne defend their hearts against the fear of losing their loved ones forever.

From the serenity of Regency England to the scandal and intrigue of the Congress of Vienna, three gentleman live, love, fight, and defend their country from Napoleon's voracious ambition.

"A surefire page-turner...Jack Caldwell's heart-pounding standoffs and heart-racing romantic moments are bested only by his real gift in clever nuances and subtle references."-Austenprose

"A spectacular integration of romance, war, history, adventure, and conflict...I was enthralled."-Austenesque Reviews

Jack Caldwell, a native of Louisiana living in Wisconsin, is an economic developer by trade. Mr. Caldwell has been an amateur history buff and a fan of Jane Austen for many years. The Three Colonels is his second book with Sourcebooks. He lives with his wife and three sons in the Milwaukee, Wisconsin area.
Loading...
or
Not Currently Available for Direct Purchase