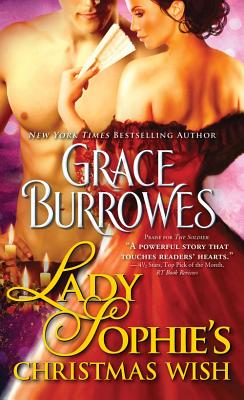 Grace Burrowes makes Christmas wishes come true in this dazzling yuletide Regency romance where getting snowed-in at the family estate is the perfect way for Lady Sophie to rekindle the desire she thought she'd cast aside.

All she wants is a little peace, but Sophie's holiday is about to heat up...
Lady Sophie Windham has maneuvered a few days to herself at the ducal mansion in London before she must join her family for Christmas in Kent--her last chance for some peace and quiet before the holidays. Suddenly trapped in Town by a snowstorm, she finds herself with an abandoned baby and only the assistance of a kind, handsome stranger standing between her and complete disaster.

With his estate in ruins, Vim Charpentier expected complications this holiday season, but he couldn't have predicted that Sophie Windham would be among them. His growing attraction for Sophie is the only thing that warms his spirits. But Sophie's been keeping secrets, and it will take more than a kiss under the mistletoe to make her wishes come true...

New York Times and USA Today bestselling author Grace Burrowes hit the bestseller lists with her debut, The Heir, followed by The Soldier and Lady Maggie's Secret Scandal. The Heir was also named a Publishers Weekly Best Book of 2010, The Soldier was named a Publishers Weekly Best Spring Romance of 2011, and Lady Sophie's Christmas Wish was named Best Historical Romance of the Year in 2011 by RT Reviewers' Choice Awards. All of her Regency romances have received extensive praise, including starred reviews from Publishers Weekly and Booklist. Grace is branching out into short stories and Scotland-set Victorian romance with Sourcebooks. She is a practicing family law attorney and lives in rural Maryland.
Loading...
or
Not Currently Available for Direct Purchase