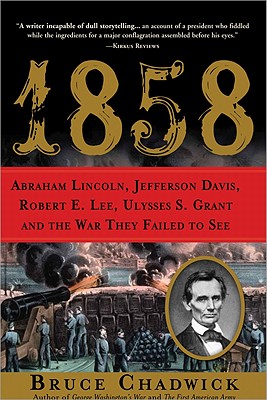 “By linking the stories of Abraham Lincoln, Jefferson Davis, Robert E. Lee, Ulysses S.Grant, and others, Chadwick creates for the reader the historical era at the near-end of the antebellum era. Included is a great portrait of a rather delusional President who is over-confident of his own policies, and sure that history will absolve his stands.”
— Dan Domike, Jackson Street Books, Seattle, WA
View the List

"Highly recommended-a gripping narrative of the critical year of 1858 and the nation's slide toward disunion and war...Readers seeking to understand how individuals are agents of historical change will find Chadwick's account of the failed leadership of President James Buchanan especially compelling."
-G. Kurt Piehler, author of Remembering War the American Way
"Chadwick's excellent history shows how the issue of slavery came crashing into the professional, public, and private lives of many Americans...Chadwick offers a fascinating premise: that James Buchanan, far from being a passive spectator, played a major role in the drama of his time. 1858 is a welcome addition to scholarship of the most volatile period of American history."
-Frank Cucurullo, Arlington House, The Robert E. Lee Memorial

As 1858 dawned, the men who would become the iconic figures of the Civil War had no idea it was about to occur: Jefferson Davis was dying, Robert E. Lee was on the verge of resigning from the military, and William Tecumseh Sherman had been reduced to running a roadside food stand. By the end of 1858, the lives of these men would be forever changed, and the North and South were set on a collision course that would end with the deaths of 630,000 young men.
This is the story of seven men on the brink of a war that would transform them into American legends, and the events of the year that set our union on fire.

Bruce Chadwick is a former journalist and author of eight works of history including" The First American Army, George Washington's War, The General and Mrs. Washington, Brother Against Brother, Two American Presidents, Traveling the Underground Railroad, The Reel Civil War, and Lincoln for President." He lectures in American history at Rutgers University and also teaches writing at New Jersey City University.
or
Not Currently Available for Direct Purchase
Copyright © 2020 American Booksellers Association