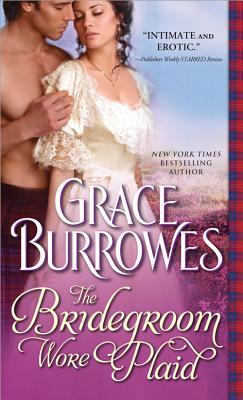 "a rich, emotion-filled tale to be enjoyed more than once."--Long and Short Reviews

Impoverished Scottish Highland earl Ian MacGregor has a chance to repair his family fortunes by marrying an English heiress. But when he falls in love with the heiress's shy chaperone, Ian must question whether or not he's willing to forfeit his heart to save the family name.

Ian MacGregor is wooing a woman who's wrong for him in every way. As the new Earl of Balfour, though, he must marry an English heiress to repair the family fortunes.

But in his intended's penniless chaperone, Augusta, Ian is finding everything he's ever wanted in a wife.

New York Times and USA Today bestselling author Grace Burrowes hit the bestseller lists with her debut, The Heir, followed by The Soldier and Lady Maggie's Secret Scandal. The Heir was also named a Publishers Weekly Best Book of 2010, The Soldier was named a Publishers Weekly Best Spring Romance of 2011, and Lady Sophie's Christmas Wish was named Best Historical Romance of the Year in 2011 by RT Reviewers' Choice Awards. All of her Regency romances have received extensive praise, including starred reviews from Publishers Weekly and Booklist. Grace is branching out into short stories and Scotland-set Victorian romance with Sourcebooks. She is a practicing family law attorney and lives in rural Maryland.
Loading...
or support indie stores by buying on
(This book is on backorder)